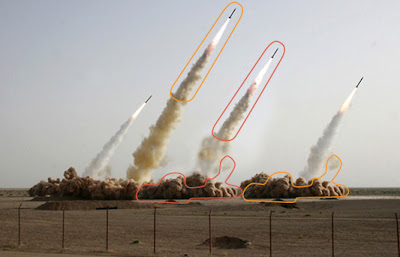 That Iran responds to Israel’s last month’s war games in the Mediterranean Sea with its own demonstration of power is understandable. Shahab-3 had been tested, by the way, earlier. In 2006, in the desert near Qom. Where the recent exercises took place was not unveiled. Pictures were published by the Revolutionary Guard Corps and reprinted all over the world (while the war games were understandably condemned as provocative and despising UN Security Council resolutions). But at least one picture was fabricated. There is one missile too many and the second missile appears to be the sum of two other missiles in the image. New York Times asks today: “Does Iran’s state media use Photoshop?”

“As news spread across the world of Iran’s provocative missile tests, so did an image of four missiles heading skyward in unison. Unfortunately, it appeared to contain one too many missiles, a point that had not emerged before the photo appeared on the front pages of The Los Angeles Times, The Financial Times, The Chicago Tribune and several other newspapers as well as on BBC News, MSNBC, Yahoo! News, NYTimes.com and many other major news Web sites.” 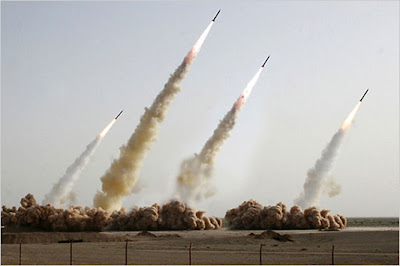 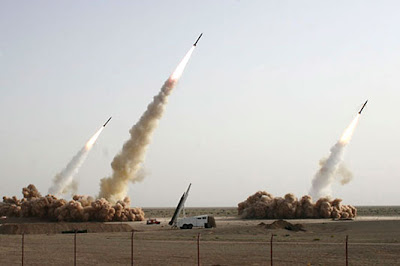 Top, the image that Agence France-Presse obtained from Sepah News on Wednesday. Below, another image that The Associated Press received from the same source on Thursday.
Posted by Muller at 20:02