I assume that only few Westerners who have lived for some time in the Middle East have not become addicted to oriental carpets. It is wonderful, handmade artwork. You’ll see the efforts, the vision, and talents of the artisan. A good carpet always tells a story. Interesting carpets may also have little anomalies in symmetry or irregularities in pattern which invite us to study them in greater detail. Sooner or later you will end up in counting the colors and checking the type of the knots: Is it Ghiordes (Turkish) or Senneh (Persian)? And you may also count the knots per square inch. The finer the better, but tribal carpets may have few and are charming anyway.
Persian carpets have been manufactured for thousands of years. The so far oldest fragment is the Pazyryk carpet which had been discovered in the Altai Mountains in Siberia in 1949. Although it was found in a tomb of Scythian prince, the pattern is Achaemenian. Amazing is the number of symmetrical knots per square inch: 232 (or 36 per square centimeter). Thus, it is a very fine carpet. Radio carbon methodology confirmed its age, about 2500 years. 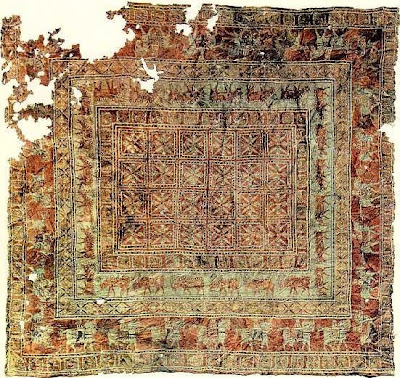 You may spend a good amount of money once you have started collecting authentic, old pieces of different provenances. One reason is that the real stuff is expensive. You will only learn by making costly mistakes. And in addition (at least that is my experience), for each good piece you may buy another five not so good.
The best way to avoid buying carpets when in Iran is to visit the stunning carpet museum in Tehran first. When having seen the century-old masterpieces of Persian carpet weaving, just wonderful and room filling, you may be rather resistant to the intricate and savvy dealers in Tehran’s big bazaar. This is particularly true if you exactly know what you are looking for. 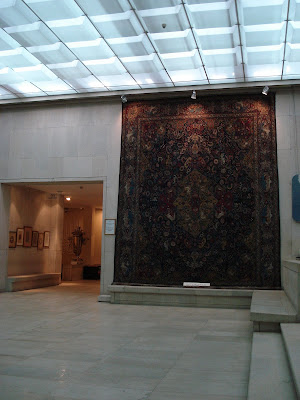 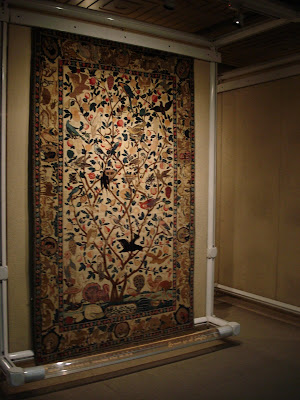 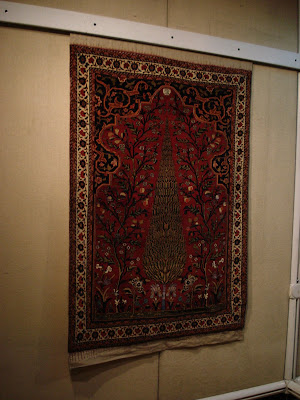 Whenever I was in Tehran, the Carpet Museum was a must. It is an amazing moment when you identify a certain motif or design in one of your own pieces. The carpet below is a pure silk tribal rug from Sarakhs at the Turkmenistan border in the northeastern corner of Iran while the original (see above) is a woolen carpet woven by members of the Bakhtiari tribe in the southwest of Iran. The cypress tree is surrounded by trees of life and various flowers. In my carpet, the borders are alternating blossoms and botehs. 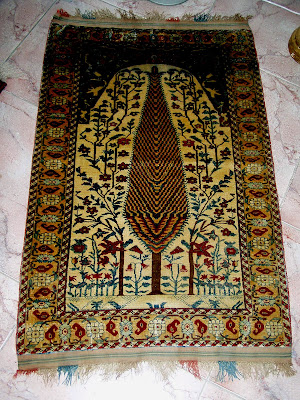 If you ask a carpet dealer about the age of an old piece he usually knows. But based on what? A rather new carpet maybe worn if put in areas with heavy traffic. And you can imagine that the most precious pieces will be hanging only on the wall and never really exposed to feet or (even worse) shoes! 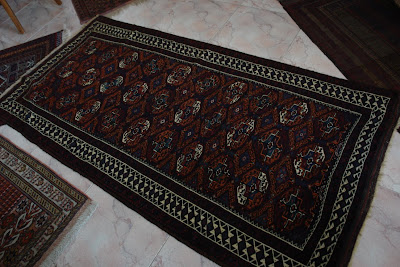 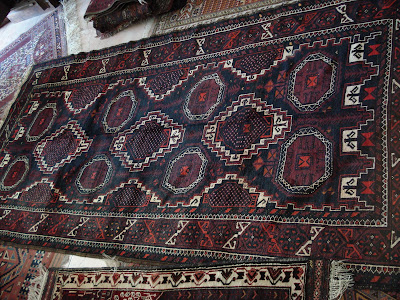 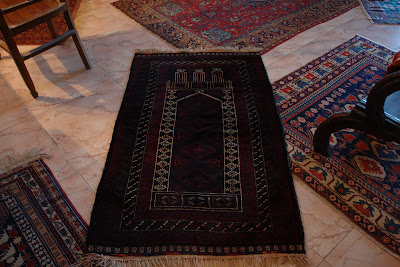 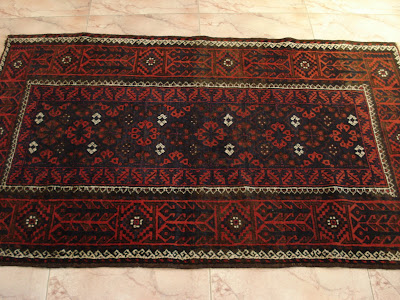 On rare occasions you may discover a woven date in the carpet. Once you have translated the Arabic numbers how can you interpret them? The piece below was 4 times as expensive as other Baluchi rugs which came with the same shipment. It is from Eastern Iran (compare, for example, S. Azadi and A. Besim: Carpets in the Baluch Tradition, Klinkhardt & Biermann, München 1986, plate 53). It says, on both sides, in the upper third of the central field ۱۳۲۹, so 1329. Since the year 2008 is 1429 AH (after hijra), one might assume that the carpet has been woven about 100 years ago. However, each year of the Islamic calendar is 11 days short of the year of the Gregorian calendar. So, you have to subtract about 3 years, giving 97. So, the carpet must have been woven in 1911, right? Not necessarily. In 1925, Iran adopted under the early Pahlavi dynasty the solar calendar with fixed numbers of days per month (31 in the first six months, 30 in the next five months and 29 in the last month (or 30 in leap years). The year starts on March 21 of the Gregorian calendar. Of course, counting started after hijra. Presently, we have the year 1387. So, is my carpet only 58 (1387 minus 1329) years old? It may be. Mr. Abbas Okhravi in Mashhad, who sold me the piece, was also a bit in doubt. He suggested the older date, of course. 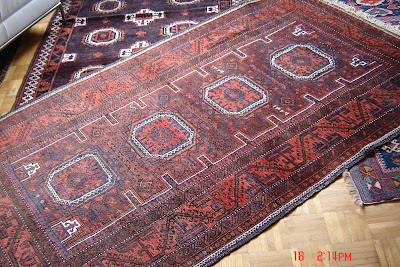 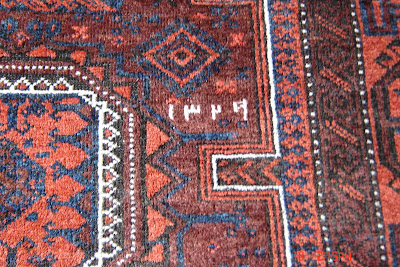 Other features have to be considered. The carpet is worn, but not that much worn. Colors are most probably made from vegetables only, but that can be the case also in a younger piece. Quality of the wool is high although the number of knots per square inch is rather low. I suppose the price was okay.

We have the carpet bug. We have a housefull in storage, but we can't resist adding "just one more" from time to time. :-) You have some gorgeous carpets in your photos.

Really Great Post here. Good choice of rugs to photographs, and a really interesting read. Thanks

I recently recieved two rugs from my uncle who purchased them in 1976 from Abbas Okhravi in Mashad Iran! Did you purchase yours recently and could this man still be selling rugs?

Hi Millie!
Amazing. Thanks for the email. I was several times invited to his home when visiting Mashhad in early 2007. I bought altogether 5 pieces. He showed me his photo album from the 1970s!

He and his son Sirous have two kinds of business, still collecting old pieces and educating the girls in the small villages to weave new carpets according to their customers' demands. I have accompanied Sirous once on a trip to the countryside where he visited the Baluchi girls. Very interesting. You may even contact him under abbas_okhravi@yahoo.com.

I am still in email contact every now and then and encouraged him to send me photos of interesting carpets he wants to sell. But I suppose you won't get them through the (US) customs nowadays.