Kuwait’s Arab Times had attracted my attention to Esfahan’s gorgeous Great Mosque in an article in 2003. Unfortunately, I couldn’t find so far a webpage of the article which praised the wonders of Iran’s largest mosque and one of the most significant and finest buildings of the Islamic world.
I visited the site the first time at my second trip to Esfahan in late spring of 2004. I took some pictures in the vast courtyard, soaked the peaceful atmosphere there, and watched the few visitors from Iran and elsewhere. I had forgotten about the many details of the article and faintly had read some of the notes in my travel guide. 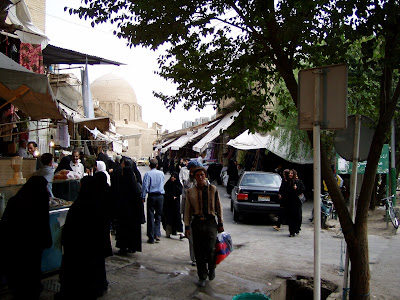 My second visit in late 2007 was driven by scientific interest. I had recently posted (at Freelance) my rather amateurish studies and thoughts about a suggested ‘conceptual breakthrough’ in Islamic architecture and art in the late 15th century, i.e., quasi-crystalline tessellations, which had led to world-wide attention due to its publication in the Science magazine by Lu and Steinhardt in February 2007. That article was in fact one of my main reasons for visiting Iran again. But in order to get a visa for traveling in the country, which is still threatened by war, I had to push myself into a professional conference in Tehran, including personal invitation by the more than hospitable organizers.
With a copy of the Science article in my hands I tried, first in vain, to find the hidden Darb-e Emam shrine in the Dardasht Quarter of Old Esfahan and explored the relics of the Seljuq period when Esfahan was the capital of the Great Seljuq Empire. Strolling through the labyrinthine alleys took me immediately back to the 11th century when Omar Khayyam (d. 1131) was living here and Nizam al-Mulk (assassinated 1092) was vizier of the Seljuk ruler Malik Shah (d. 1092). 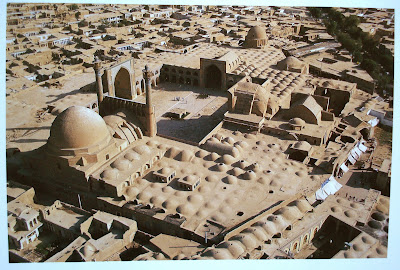 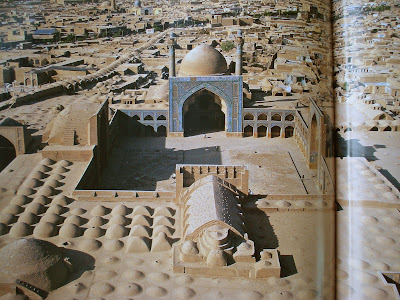 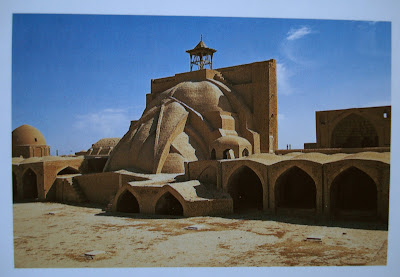 Since I couldn’t find the Darb-e Emam shrine my interest turned to Esfahan’s Masjed-e Jomeh. Here I took, again as a tourist, many pictures. Although quasi-crystalline tiling patterns were described there, too, I wasn’t sure what exactly I was looking for and where to find it. The mosque features tilings from three important periods, Seljuq, Timurid, and Safavid. The overall construction with its four iwans was first implemented here in Esfahan and might have its origin in (pre-islamic) Sassanid vaults. The article mentions a northwestern iwan, but in other publications northern and western iwans were described. I stayed not longer inside the complex than, say, for one hour. That was a big mistake which I only noticed later.

I eventually detected Darb-e Emam a couple of days later. I could identify it and many other hidden sights which I have described elsewhere on a tourist map which I got in the famous Abbasi Hotel. I had still to ask several people. An Afghan refugee finally guided me to the site where I took several pictures of the described nonperiodic tessellations and of more conventional artwork close-by. You may find pictures of this rather small complex here.

Later, at home, discovering important pieces of decoration on the four iwans of the Friday Mosque on the pictures was cumbersome but inspired me to special thoughts about time and genius. 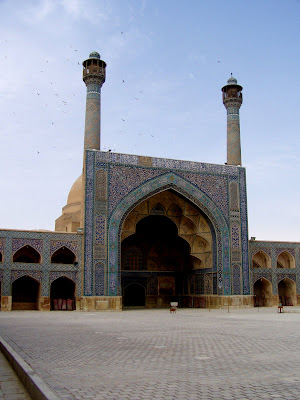 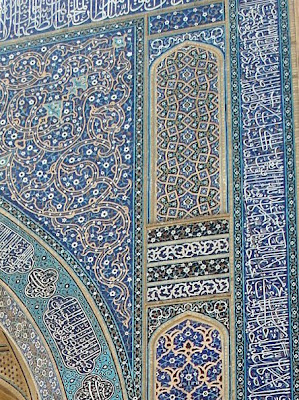 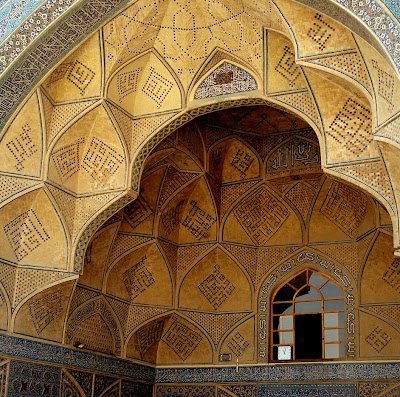 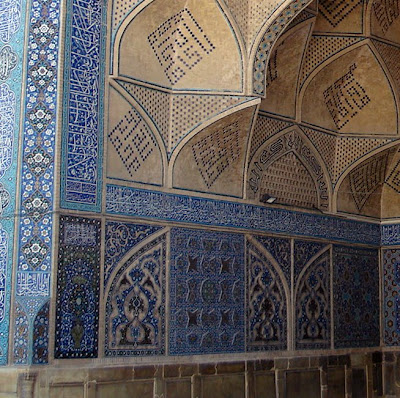 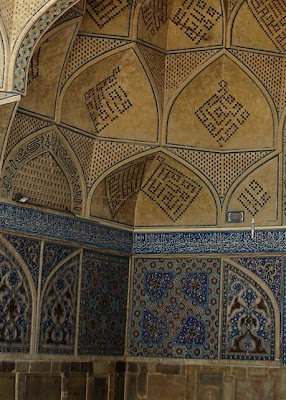 The question which mainly absorbs me is: When? Also how, and why? Quasi-crystalline patterns are only found on the western iwan (see below), at the inner sides of the portal. On a huge area, much larger than those few on Darb-e Emam. But this western iwan displays, in contrast to, for example, the southern main iwan a very austere decoration with a rather simple geometric decoration and squared kufic calligraphy. It is definitely from the Seljuq period. Typical newer tile decoration, whether late Timurid or early Safavid, can in fact better be marveled at the southern iwan with its floral patterns, vases, vine scrolls and spirals, and thuluth calligraphy. See, for example, in the picture above, how richly the kind of swastika was decorated in this later period. According to theory, the manufacture of non-periodic tiling is a later conceptual breakthrough (late Timurid in 15th century). But when quasi-crystalline pattern are found, say 50 cm distant to more conventional swastikas and kufic inscriptions dating back to the more austere Seljuq period (see the pictures below), is it possible that what we now call ‘Penrose’ patterns, in fact has been been created earlier?

It is, of course, about terms, as well. We are creating images which are contemporary. And we do not know how, and if, it was called one thousand years ago. So far, no written documents have been found describing decagonal symmetry but an anonymous paper from the 13th century (as a comment to much older work by Abu'l Wafa' al Buzjani, a well-known mathematician living in Baghdad between 945 and 987) describing the construction of a pentagonal seal (which can be seen in the Abbasid Palace in Baghdad, dated 1180-1230) employing the Golden Triangle (which has a close relationship to Penrose's kite and dart tiles) has been described by Wasma'a K. Chorbachi and Arthur L. Loeb (in Istvan Gargittai. Fivefold Symmetry. World Scientific, Singapore 1992). 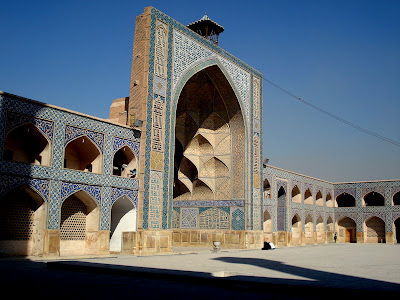 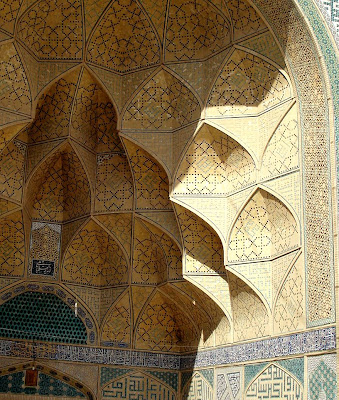 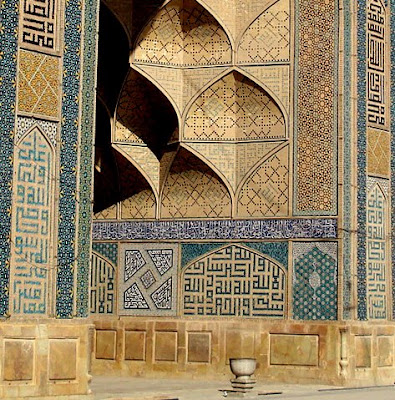 What is amazing me, too, is that Iranians all the time during their millennia-long history had forced the invaders of their country to adopt local customs, art und science, religion. Starting in historical times with Alexander’s short-lived Hellenization under the Seleucids. Then Arabic Islam; Seljuq’s, Mongolian’s, Timurid’s nomadic culture: all of which certainly existed but was profoundly modified and inspired, all was Persianized; in the meaning of change according to the culture of the people that had been ‘conquered’.

How absolutely GORGEOUS. Thank you for publishing those beautiful photographs. I would love to see it in person!

If you really don't dare to visit the country try to find Henri Stierlin's book, for example in Al Muthana's book shop (I got it there).

What a wonderful post. Beautifully written with great photography. Thank you Fahad.
I went to Tehran for the first time in April. My work will take me there now and then - and I hope to steer some of my meetings in the direction of these amazing sights. I am currently content with just seeing Tehran and the surrounding mountains. My understanding is that Isfahan offers Islamic history/architecture and Shiraz has the sights of pre-Islam Iran.
Business trips aside, we have Iran on our list as a family to go on holiday. I hope to be able to take photographs at these amazing places. Thanks again..

Thank you Mohammad!
I will post very soon also my pictures of 'Islamic' Shiraz which may not represent 'nesf-e jahan' but part of the other half, for sure. ;-)