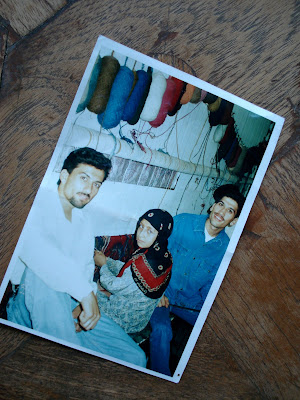 I have recently mentioned these two guys in another posting mainly featuring my friends Seyed and Mirwuis from Afghanistan. All of them are dedicated and honest carpet dealers with profound knowledge, selling high quality pieces from their home country, from Iran and Central Asia. I don’t know how carpet business is right now in Kuwait for Ali and Hussain. It all depends on the Westerners, I suppose. Kuwaitis go for different pieces, I was told in the Persian Carpet Exhibition in Salmiya.
I had mentioned them in relation to a photo which I have carried for some time even in my wallet. It shows both, Ali and Hussain and a little Afghan girl weaving a carpet. Hussain, the lad on the right, proudly smiles into the camera. Ali, his older brother, seems to be more quiet but very self-confident. The girl doesn’t smile. In fact, you can feel even an atmosphere of embarrassment emanating from the girl. She might not be older than, say, seven or eight. Let’s call her Fatima.

The photo is a kind of a business card of the shop owners in the vicinity of Kuwait’s Mubarakia Heritage Souq downtown Kuwait. When you turn it, a map is drawn telling you also some contact information.

We liked to go to the souq in the evenings. We enjoyed chatting with the shop keepers, introduced our guests who every now and then visited us and even persuaded them to buy a nice piece, maybe a Turkoman carpet or Balouchi rug. Afghan war rugs were, after 9-11, especially sought-after. Unfortunately, I have given them away to friends and relatives, now much more aware of their emotional value. I always got the best discount because I dragged many new customers to my friends from Afghanistan.

But the main reason for this posting is in fact Fatima. Hussain, who had great charisma, liked to tell us heartrending stories about the young girls involved in the manufacturing of the rugs. They would take the nicest pieces for their dowry, of course, but how come that the nicest pieces were displayed in Hussain and Ali’s shop in Kuwait?

A picture is worth a thousand words. This one tells us so much about the society these three people are living in and/or coming from. The principle of master and servant, which I despised so much when living in Kuwait. But, on the other hand, I enjoyed it also a lot. Child labor, even child marriage comes to my mind.

I do not want to be misunderstood. I do not criticize. I only watch, as usual. For me it is very clear that changing the circumstances is not possible in a ‘war against terrorism’. It will take more than a generation to implement standards of human rights the so-called West has only adopted during the last 200 years or so. Afghanistan is a country which is now continuously inflicted in war for almost 30 years. It has been a playing field of super powers which really didn’t care about the human beings whose home country it is and was.
Hussain and Ali and their cousin Firous, who has a small shop in the nearby souq, are, as I understood them, Shi’a which had to suffer especially under the terrible Taliban regime. Some of them were even refugees now located in Khorasan in northeastern Iran. All of them have a hard life, incomparable with ours. We are or have been so privileged to learn about a foreign culture in a socially settled and financially safe situation.
I want to wish all three people on the picture a better future and satisfaction in life. In particular, as Ramadan is coming to an end soon and this time of the year demands good deeds and thoughts. And, Hussain (if and when this posting will ever reach you), if you have a nice war rug from Afghanistan, let me know!
Posted by Muller at 09:58

I thank you for your post. I also very much enjoyed the one on the Carpet Museum of Iran. Very nice to read a blog by such as this by a real person posting on real things.

Keep up the great work :)

Thanks, Dave,
I am still hoping that one or the other of these guys gets my message and contacts me. Maybe through some of the Westerners in Kuwait. Hussain is quite famous among them. Very competent!

The weather here is suddenly changing, and evenings in Mubarakiyya are once again about to become possible. I will stop by Hussein and Ali's and mention your blog entry, Fahad. I bet twenty or thirty people have already told them. :-)

Do you also raise pigeons?

Thanks intlxpatr,
No, I don't raise pigeons, why? When you visit Hussain and Ali, tell them my best regards, please. I now know the prices for respective pieces in the West! (But don't tell them!)


Do you know if Hussain and Ali are still operating in Kuwait City? If so, do you have any way on contacting them? I bought a carpet from them many years ago and want to make contact.

Many thanks for any help you can provide.