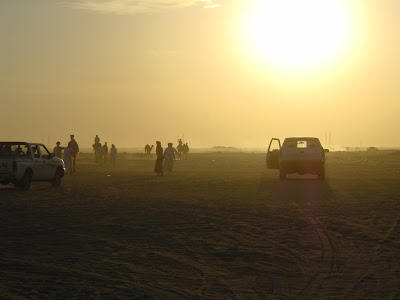 I know that I was always very privileged when living in the country. My Ramadans were usually nice times full of interesting discussions about religious matters and in general plenty of opportunities for widening my horizon.

However, the easy-going times of Ramadan are now definitely over. Since last year (when I had left the Middle East for good already) the Holy Month is moving into the summer months and will be observed for about 12 years during the scorching heat. A full circle of the Gregorian-Hijra calendar is 33 years, an entire generation. Since in Muslim countries the population is very young, few people have experienced the harsh conditions of fasting during the long, extremely hot and, what makes it even worse, humid days.

I have noticed that the weather conditions were very uncomfortable in Kuwait the last days. When living in Kuwait, I had expressed my concerns many times and usually was told by the older Kuwaiti colleagues that people were used to it. I doubt. Most people are anyway working indoors. My compassion and sympathy is especially with Bangladeshi, Pakistani or Indian construction workers who have to bear the brutal heat and humidity in full which is in fact unbearable when it comes to 40+ degrees and close to 100% humidity. I remember only one time that this condition had hit me. In my first September in Kuwait, it was very similar: water running outside the windows.

I was also wondering how it was in Makkah, for example, when the Holy Qur’an was revealed to the Prophet (PBUH). According to tradition, he’s got the first revelation in a cave of Hira on August 10, 610 CE when he was fasting in the month of Ramadan (I think that it was at the end of Ramadan, the last few days are still observed by the faithful as Laylat al-Qadr). On that very day this year Makkah reported 42 degrees maximum temperature and rather humid conditions.

So, people at that time were in fact kind of used to it. By Hijra of the Muslims in 622, Ramadan had moved 132 days ahead, i.e., end of April, which still seems not to be very comfortable in Makkah (37 degrees, very humid this year).

Madinah may in fact be a bit different. It is also at a higher altitude, >600 meters above sea level.

In the old days in Kuwait without any air condition people would not have worked too much but used the long hours for contemplation and prayers. Badgirs, or wind towers, dominated the village, not skyscrapers as today (see Sharq Market as an example; they are found all over and on both sides of the Persian Gulf). The need for physical activity was at a very low level, I suppose.

Today’s greed and hyperactivity makes life so difficult during Ramadan in the summer. There might be a chance right now for a change in the society. Since I would expect even casualties this summer and in the coming years, authorities have to do something about it. Not only there but also in the Emirates, Qatar, Bahrain, even Saudi Arabia.
Before I left Kuwait, working hours during Ramadan had been shifted already to the early morning hours. Construction workers woke me up, not the muezzin. But then Ramadan was still in October, which may be nice in Kuwait, especially at the end of the month.
Posted by Muller at 13:54

when ramathan starts in the hot month of june july or august
im going to vacation somewhere cool
where i can fast and not want to kill someone or myself :)

Fascinating subject, Fahad, and thanks for illuminating past customs celebrating Ramadan. I remember a century ago in Tunis, when Ramadans were during the heat of the year. People only went to work until noon or so, and then the entire country shut down, every day, until after Futoor. I think the big problem with Ramadan now is trying to do Ramadan AND maintain a normal life. It puts so much pressure on everyone.

Maybe we are paying too much attention. I usually accept THE DIFFERENCE. Muslims see the holy month as a blessing. But it's true, most of the youngsters, which may be spoiled, do not really want to feel the hardship of fasting in order to feel how it is when they are poor (I have to admit, I won't either).