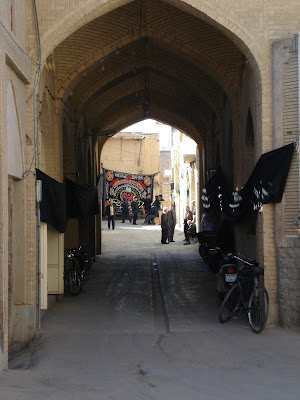 On the 25th of Shawwal (November 5, 2007), a public holiday is celebrated in Iran, commemorating the martyrdom of the 6th Imam, Jafar as-Sadiq. Thus, the old quarters of Esfahan, in the 11th to 13th century the capital of the Seljuk Turks, with the gorgeous Masjed-e Jomeh, were very calm on this morning. But the shops in the bazaar opened later.

Men were gathering for mourning, and banners and black flags could be seen in many places of the bazaar. 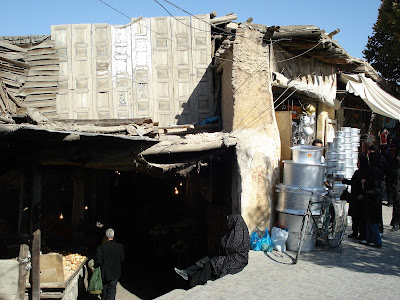 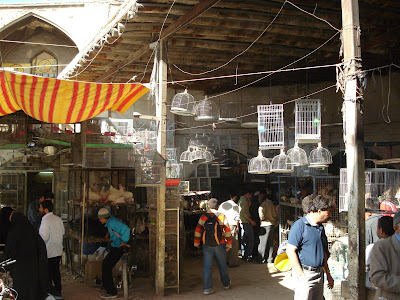 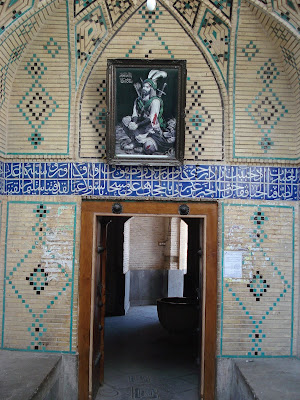 Imam Hossein’s half brother, Abbas ibn Ali ibn Abu Talib, who was martyred at the battle of Karbala, too, is displayed on the picture at the entrance of the little mosque in the bazaar, with beautiful tile patterns on one the main iwan. While walking through the narrow lanes of the old city, the two minarets of Soltan Bakht Agha and Baba Qassem’s mausoleum, both from Seljuk’s era, attracted my attention. 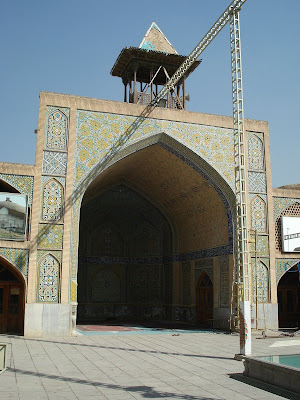 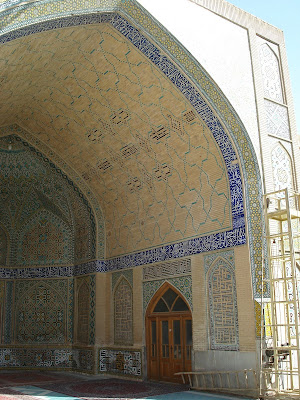 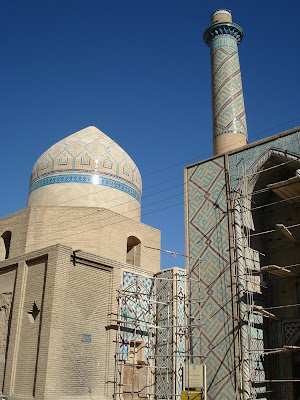 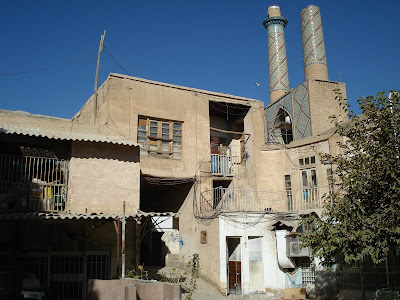 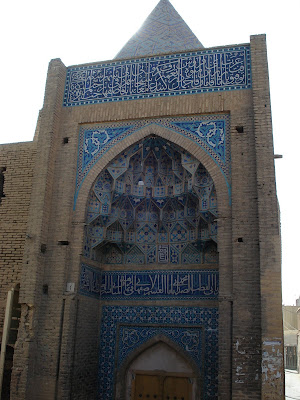 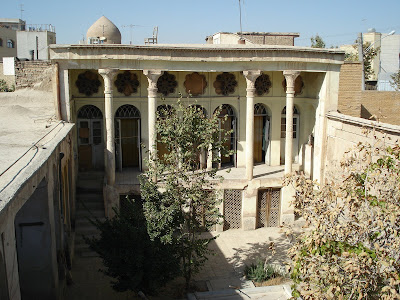 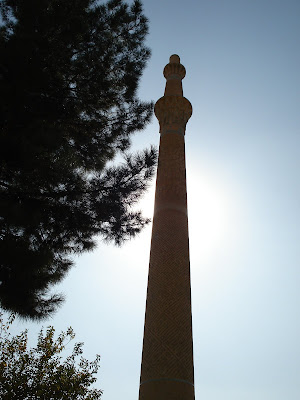 In the northeastern direction a significant landmark is a single, more than 50 meters high, Seljuk minaret, Monar-e Sareban, the 'minaret of the camel driver'. The respective mosque has vanished. The slender shaft shows kufic inscriptions and geometric patterns of turquoise tiles. To the north, there is an even older minaret, Monar-e Chehel Dokhtaran. 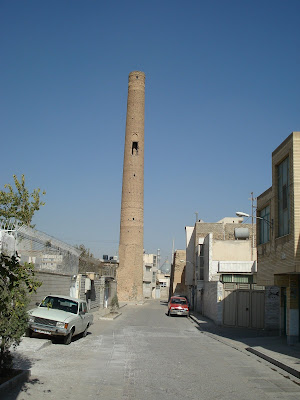 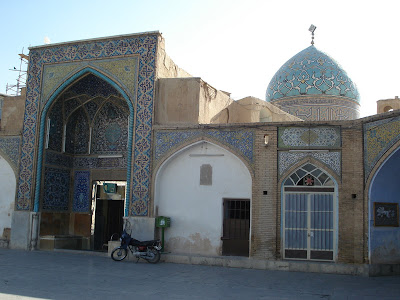 The whole quarter was once inhabited by Jews which may still comprise a small but significant part of Esfahan’s population. It is said that Imamzadeh Isma’il in the Yazd Abad quarter contains Isaiah’s tomb. Near the small mosque from the Safavid era, a truncated small Seljuk minaret can be seen (with a later more slender addition) as well as a bulky Turkmen dome.
On the roof some openings can be identified where the ruins of the much older previous mosque and the remains of the Jewish prophet may be assumed. Great view of other mosques, especially that of Ali in the southwest with its 50 meters tall minaret. 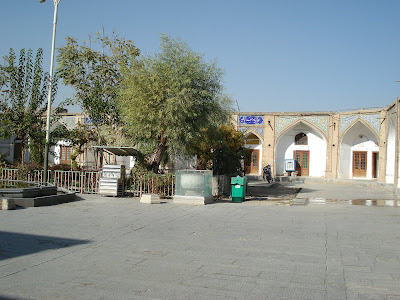 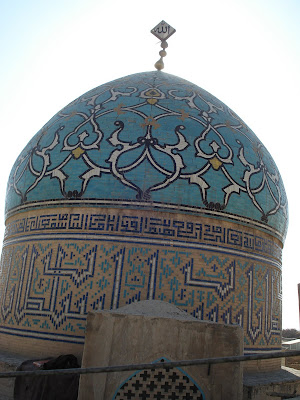 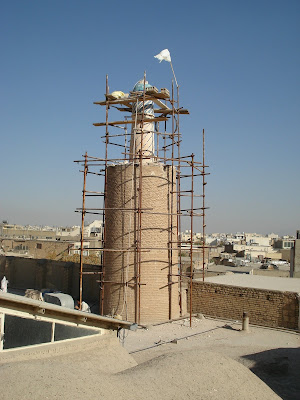 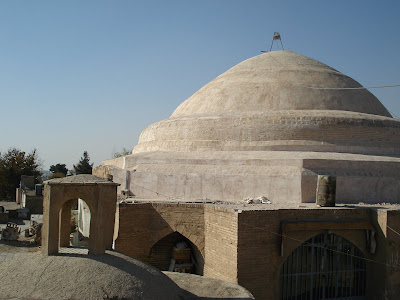 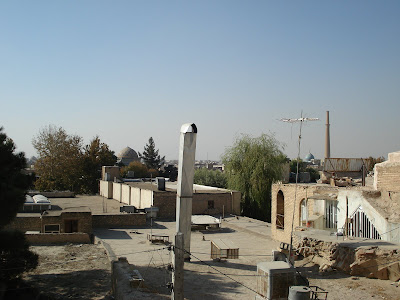 A pretty large Jewish cemetery from the 2nd Century CE is said to be located in the small village of Landjan, about 25 km southwest of Esfahan’s city center. What we finally found was a small synagoge which is still used by the local Jewish population as burning candles indicate.
The guard was rather suspicious when a Christian and his two Muslim colleagues asked for permission to have a quick look. 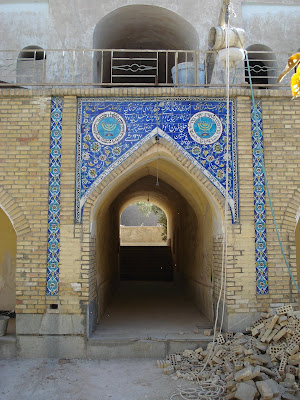 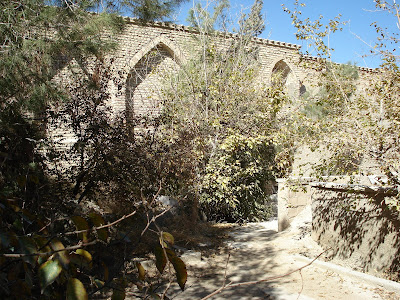 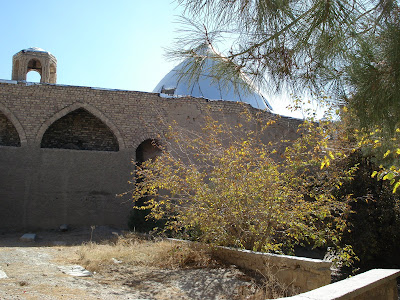 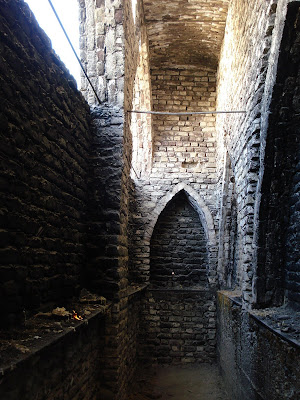 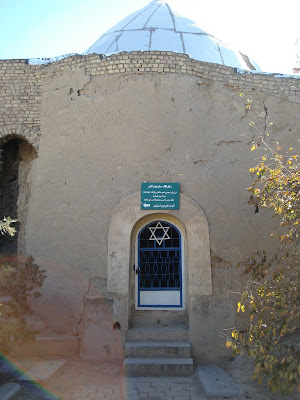 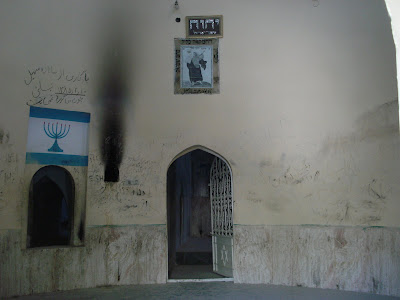