Husayn ibn Ali ibn Abi Talib and his family left Madinah on the 4th of Rajab in the year 60 AH and reached Makkah on the 4th of Shaban. They stayed there for some time, but they did not complete the hajj as they had pretended to do. Rather, on the 8th of Dhu’l Hijjah the small caravan set out for Kufa in Iraq, Ali’s former Capital. It was on a hopeless mission. The plot against Yazid, the infamous and so much hated Umayyad Caliph, Muawiya’s dissipated and incompetent son in Damascus, had been betrayed. When they reached the Euphrates, the local ringleaders had been executed already. Husayn, his family and his men, not more than a few dozens, would have better been advised to surrender. The enemies' army consisted of thousands. But the brave knights didn’t.

The battle on the banks of the Euphrates at Karbala on the 10th of Muharram in the year 61 AH, the day of Ashura, didn’t take long. Although Husayn was wearing his grandfather’s cloak and had taken-up the Dhul’fiqar, Ali’s famous double-bladed sword, it didn’t help. He and all men of his army were slain, and women and children deported to Damascus. Yazid himself ordered the mutilation of Husayn’s body. 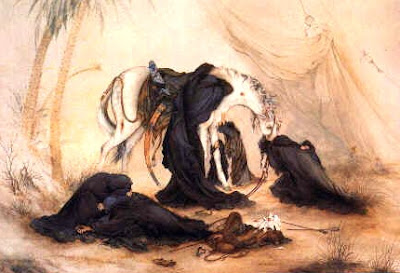 After the battle, Lady Zaynab, Husayn’s sister, became for a short while the leader of the Shi’at Ali and the guardian of the orphans of Ahl al-Bayt, the family of the Prophet. The heads of the martyrs and all womenfolk and children were sent to Yazid in Damascus. When Yazid was presented with Husayn’s head on a gold dish he started to poke his lips and teeth with a cane, to the disgust of a venerable companion. ‘Take your cane from those lips,’ he cried, ‘for by Allah, I have seen the lips of the Prophet (pbuh) kiss those lips!’

Husayn's little daughter Ruqaiyyah, who was desperately asking for her father, was shown the head, and she died on the spot. Her shrine in the old city of Damascus is full of toys. She was only 5 years old when she died in a shock. Lady Zaynab was later sent back to Madinah where she died the following year. Her shrine is in a mosque in the vicinity of Damascus. Another is in Cairo, Egypt. Some people assume her tomb in Madinah. 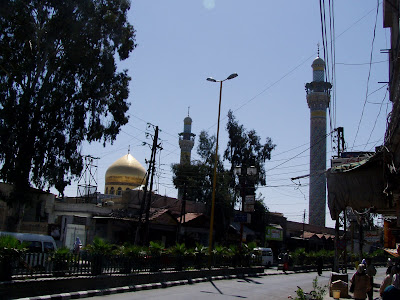 Wilfred Thesiger, an extremely knowledgeable British explorer who in fact lived with the people in the vicinity of the Holy Cities of Karbala and Najaf (the former Kufa) in Iraq, wrote in his famous book Marsh Arabs (1964) on page 53:

“Shiism had started as a political movement among the Arabs to advance the claims of Ali and his descendants to the Caliphate. But after the martyrdom of Husain, it established itself as a new religious movement and soon became especially powerful in Iraq and Persia, embodying the social discontent of the indigenous population with the Arab aristocracy. In time, Shiism split Islam as decisively as the Reformation devided the Catholic Church. Whereas the orthodox Sunnis recognize Ali as the fourth of the Caliphs, or successors to Muhammad, the Shias regard the first three Caliphs as usurpers. They believe in an apostolic succession of Imams who followed the Prophet. Most of them believe in twelve of these, of whom Ali, Hasan and Husain were the first three, the others being Husain’s descendants. According to the Shias, the last Imam was Muhammad al Mahdi who mysteriously disappeared at Samarra and whose return they await in the fullness of time as the Mahdi or Expected One.”

The first 9 days of Muharram, the first month of the Islamic calendar, are dedicated to intense mourning in any Shi’a community, be it in Iran, Iraq, in the Emirates of the Gulf or in the Eastern regions of Saudi Arabia. The Ashura Festival on the 10th of Muharram commemorates the events of the Battle at Karbala and the Martyrdom of Husayn with vivid performances, processions, and a shocking brutality of self-flogging of young men and boys. If you won’t believe that there is a close, at least spiritual, relationship between Roman Katholic Church and Shi’a Islam, have a look at (very realistic if not real) crucifixion scenes on the Good Friday in the Philippines.
Posted by Muller at 12:18