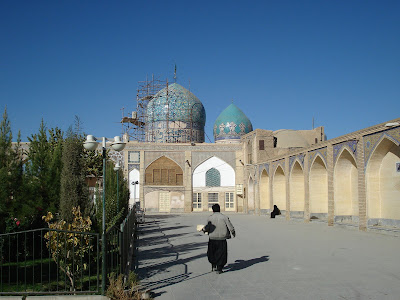 The old Dardasht quarter near Esfahan’s Friday mosque hides another gem caught in time. The stunning Islamic art with an incredible degree of complexity has fascinated the West for a long time. Beautiful mosaics cover the dome, the minarets and the pillars of mosques. It was hold that the strict geometric star-and-polygon ornaments in, what is called in the West medieval, Islamic architecture was conceived as a network of zigzagging lines where the lines were drafted directly with a straightedge and a compass.

Henri Stierlin writes in his monumental work about Islamic Art and Architecture (2002) about decorations of the Timurid era:

"The determination of this splendour-loving dynasty to give religious buildings a special grandeur and lustre led to rivalry between architects as to who would produce the most perfect work, the design that was most unified while fully exploiting a variety of motifs, and a multiplicity of techniques including brick, glazed surfaces, mosaics, pierced screen, and sculptured friezes. The designers unhesitatingly juxtaposed rigorous geometry, borders with repeating patterns, arabesques of twirling stems that spiral out across panels and into corners, and the blaze of gold that heightened the sacred character of the building and evoked the splendours of paradise. Everywhere, with the horror vacui that characterizes the art of Islam, motifs multiply until at times the effect of patterns on a minute scale endlessly repeated gives the impression of a plain, smooth and glassy surface, with an unreal sheen, as though solid matter were in a state of dissolution."

Very recently, the Darb-e Emam shrine near Esfahan’s Friday mosque has attracted the special attention of scientists. When studying the mosaics found there Peter J. Lu of Harvard University and Paul J. Steinhardt of Princeton University discovered that these could not be created with compass and ruler. Instead, by 1200 CE these patterns were reconceived as mosaics of a special set of equilateral polygons decorated with lines, so-called girih tiles. These tiles, which could be drawn with techniques that were known to medieval Islamic mathematicians, enabled then the creation of increasingly complex periodic girih patterns, and by the 15th century, the tessellation approach was combined with self-similar transformations to construct nearly perfect quasi-crystalline Penrose patterns, five centuries before their discovery in the West. 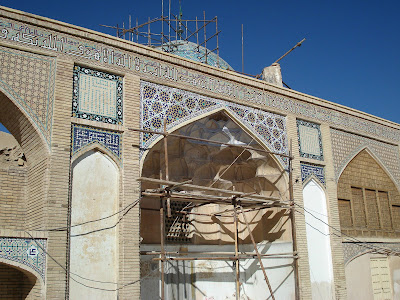 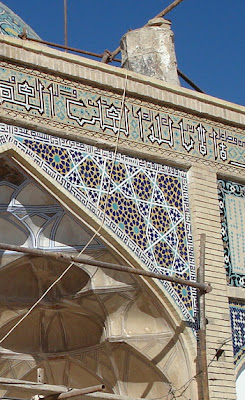 Quasi-crystals show five-, ten-, and twelve-fold symmetries, in which they can be superimposed on themselves by rotating them by a fifth, tenth or twelfth of a full circle. While hexagons (such as honeycombs) can be fit together, polygons with five, ten and twelve sides cannot be packed together without leaving gaps. Lu and Steinhardt showed, however, that Penrose’s tiling scheme could generate quasi-crystalline patterns.

The girih design on the Darb-e Emam shrine in Esfahan, constructed in the mid 15th century, is almost identical to a Penrose tiling. Like a true quasi-crystal it looks regular but never repeats exactly.

Why islamic artisans developed these patterns which seem to be regular but do never repeat, is not clear. It might be conceived that apparent perfection should not collide with the Allmighty. Higher complex, quasi-crystalline, patters may be perceived superficially as inaccurate or even flawed, but may reveal real mastership on the second sight.

Examples for a true quasi-crystalline pattern and a different, less complex, pattern both in Darb-e Emam are shown below. 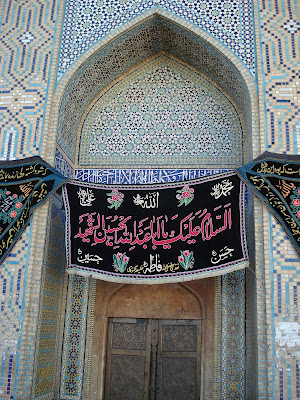 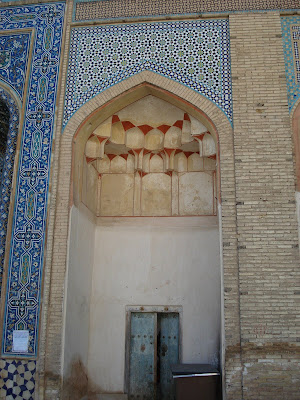 After having asked several people in the labyrinthine old city a friendly refugee from Afghanistan guided me finally to the hidden place which is not mentioned in common travel guides.

See also a further article with numerous links, and interesting views of another expert.
Posted by Muller at 07:39