Half of the World 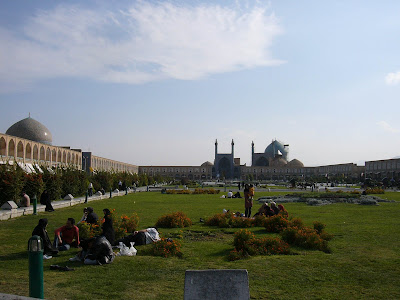 The old adage and nice pun Esfahan nesf-e jahan, literally “Esfahan is half of the world”, was coined actually in the West. The capital of the Safavid Empire is a city of great splendor. Shah Abbas created in the 17th century particular the Naqsh-e Jahan square with its almost overwhelming architecture. It is expressing function, of course, but even more, pure beauty. The noble Esfahanians know, they are living in one of the world’s finest, most beautiful cities.

Three main buildings are ingeniously arranged around the square which is known to be one of the largest on Earth. The Grand Shah Mosque, the Lotfallah Mosque, and Ali Qapoo Palace. Imagining Shah Abbas The Great watching, from the balustrade of Ali Qapoo, his polo playing horsemen in the center of the square is just fun. Nowadays, the huge lawn with its fountains and flowerbeds is used by relaxing Esfahanians for picnic, watching people, and enjoyment of life. Horse-cart carriages provide tourists with memorable rides around the square, which is 512 meters long and 163 meters wide.

There was a new tendency of neon writing adverts this year in the dozens if not hundreds of fine shops of artisans in the arched arcades facing the square. But it doesn’t matter. The square incites emotions in an incomparable way especially at night when young couples in love stroll around soaking the atmosphere and splendor of the gone past. 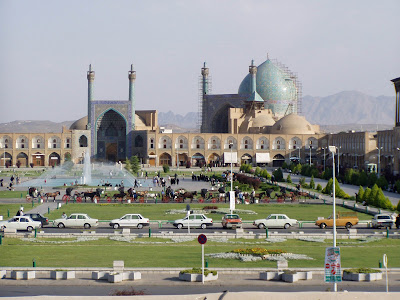 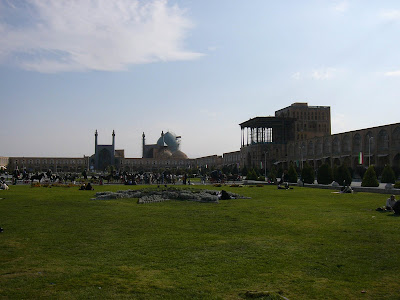 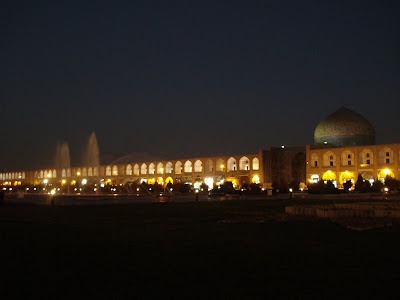 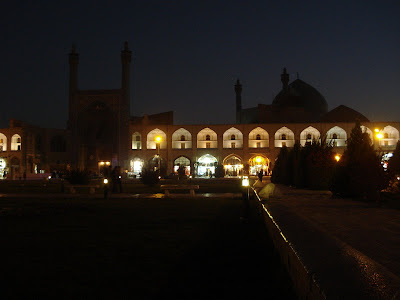 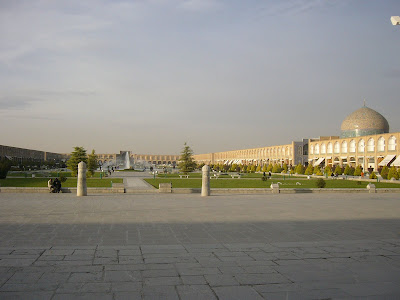 What is most probably so stunning when describing the Shah, or how it is now called, the Imam Square (but its real name is, of course, Naqsh-e Jahan, the drawing of the world) is the asymmetrical arrangement of its most significant buildings in its southern half. There is a stark contrast between the austere and, due to its incredible richness of blue tiles, somehow overwhelming, Shah mosque in the southwestern corner of the square and the so harmonious Masjed-e Sheihk Lotfallah, a true masterpiece of Islamic art. It can be found on the eastern long side of the square just opposite of the Ali Qapoo Palace. Sheihk Lotfallah was the Lebanese father-in-law of Shah Abbas I, the great architect.

Changing light during the day has a decisive effect on the colors of the dome which is covered by cream-colored tiles. The fine portal of the mosque reminds us of heaven with its stalactite and mosaic work with ever changing motifs.

It is said that the mosque was never used by the public since it was exclusively built for the Shah’s wifes. Thus, the mosque has no minarets, which are usually used for calling the faithful for prayers, nor a courtyard. 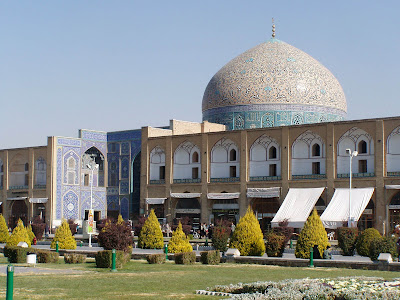 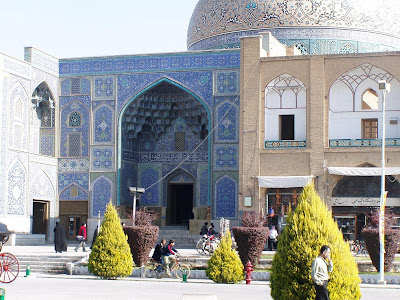 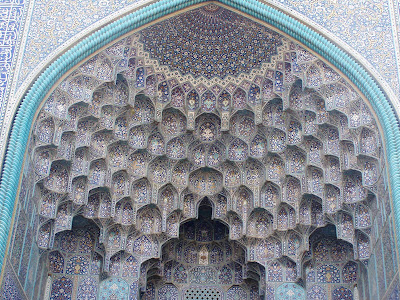 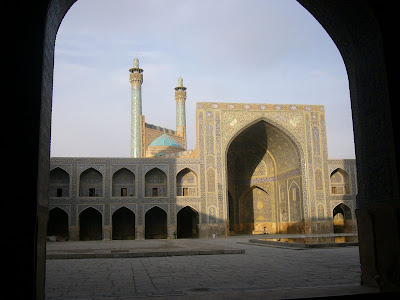 Although not belonging to the most beautiful mosques in the world, the Shah Mosque (now Masjed-e Emam) is a must for visitors for several reasons. The grandeur of its architecture is mainly due to its austerity on first sight, but stunning decoration when having a closer look. The mosque does not contain a Holy Shrine as so many others in Iran. So, from a religious point of view it is not attracting pilgrims. It is Shah Abbas’ vision of a religious masterpiece for his capital. The complex is entered through a huge entrance portal. From the courtyard, the façade is shimmering in the light in varying colors as the sun is illuminating it throughout the day. The whole mosque is angled in relation to the Naqsh-e Jahan square, in the direction of Makkah. The main sanctuary has a ceiling which is 36 meters high. There is a spot on the floor where a multitude of echoes can be heard if you stamp on it. It is said that the physics behind that echo were not known exactly when the mosque was built. 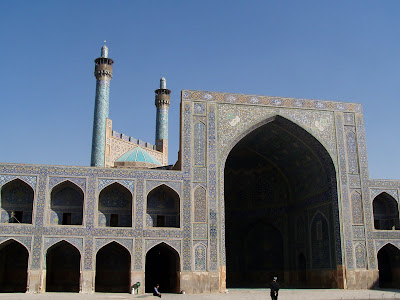 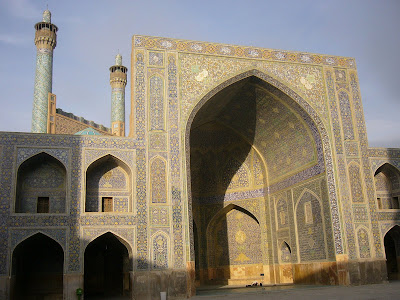 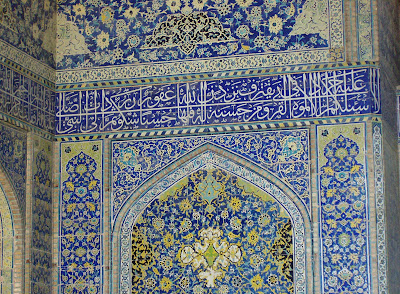 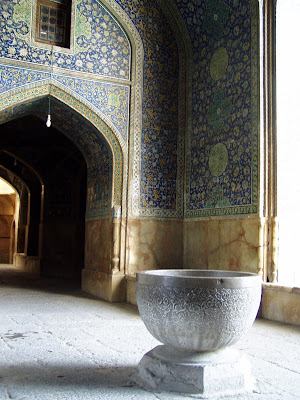 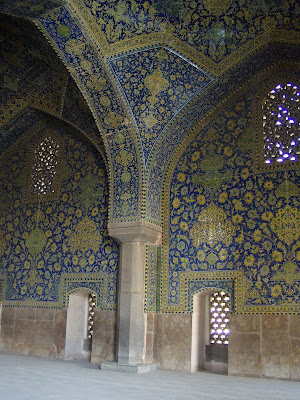 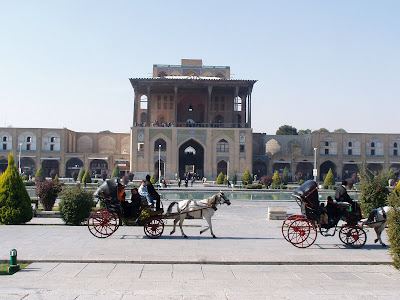 If any traveller between the East and the West wants to find a Shah’s Palace in Old Persia, majestic Ali Qapu with its monumental gateway and elevated terrace would be the perfect example. The wooden ceiling of the terrace is elegantly supported by eighteen wooden pillars. The terrace provides great view to the Lotfallah mosque on the opposite site of the square. 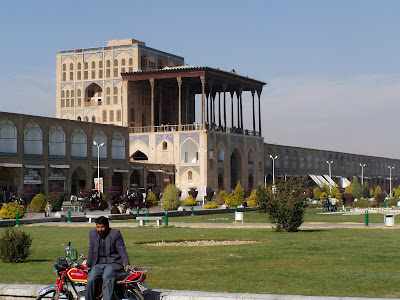 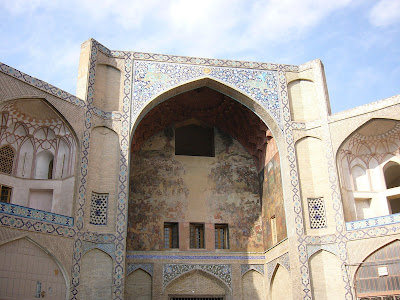 The arcades around the great square harbor most probably hundreds of shops where artisans offer the famous hand-painted miniatures, copper work, carpets and kilims, and hand printed table cloths. At the Northern corner of Naqsh-e Jahan, a huge portal leads to Bazar-e Bozorg, the great bazaar of the city of Esfahan. This portal is decorated with fading miniatures showing war and hunting scenes. On the left side, a narrow stairway leads to the roof of a teahouse with the most fantastic view over the square. 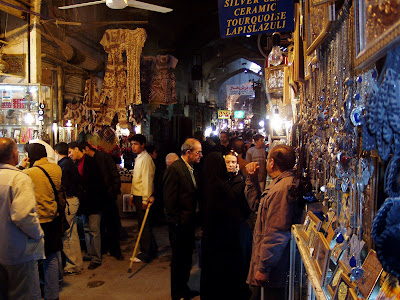 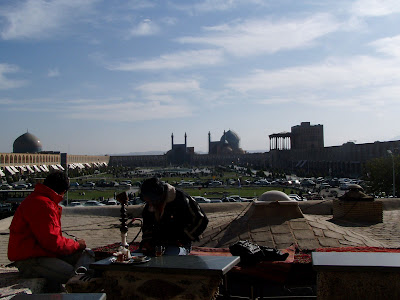