A Carpet from the Safavid Era

The Safavid dynasty was founded by Shah Ismail I (1487-1524) who established Shi’a Islam as state religion in the Persian Empire. Shah Abbas I (1571-1629) is considered the most eminent ruler of the Safavid dynasty. He brought into reality his brilliant visions of architecture in his new capital Esfahan. Although Esfahan has a much longer history, he in fact made it again the most wonderful city in the world. I have described my ever growing fascination of his architectural achievements and other miracles which can still be found in this place in many posts of this blog.
Due to successful military campaigns against Uzbeks in Khorasan and in present day Iraq against the Ottomans, the expulsion of the Portuguese from areas around the Persian Gulf, and his diplomatic skills Abbas the Great re-established the Persian Empire after the Arab conquest as one of the major world powers. Personally-wise, he was a cruel emperor. He was obsessed with fear of being assassinated. So, many of his family members were killed or blinded if they aroused his suspicion. 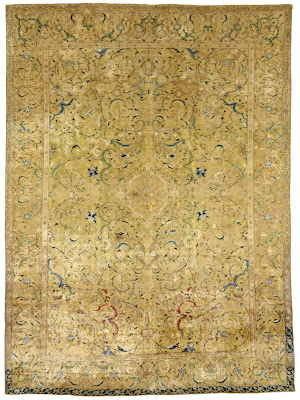 When reading that American art collector Doris Duke was the former owner of the piece one may ask the question: How many inalienable carpets of this kind are still hoarded by wealthy Iranians in the vast storages of Tehran Bazaar?
Posted by Muller at 09:28