Not Pushing Iran into a Corner

There is a lot of talk about a missed deadline these days when it comes to Iran’s nuclear issue. On July 19, the 5+1 talks with Iran’s top nuclear negotiator Saeed Jalili took place with a surprise appearance of William J. Burns, America’s new Under Secretary of State for Political Affairs. Unfortunately, he was not supposed to take part in the discussions. But anyhow, the mere fact that he listened to the Iranian standpoints was quite a sensation after almost 30 years of the American-Iranian ice age. The talks had been characterized as very constructive by both parties although the 5+1 did not get a definite answer with regard to their rather generous offer in case of freezing the uranium enrichment by the Iranians. According to Reuters, Javier Solana and Saeed Jalili agreed upon further telephone contacts within the next two weeks or so. There was no deadline set or mentioned.
A self-fulfilling prophecy: that is what most observers expected when Burns had been sent to Geneva. Let him be witness in useless talks and then give a green light for an air strike. It was absolutely clear from the beginning that no immediate decision upon the freeze for freeze offer of 5+1 could be expected. In fact, immediately after the talks, Jalili ruled out further discussions with regard to a freeze of the enrichment program. The June 16 offer is, by the way, a modification of the 2006 package of incentives for suspending uranium enrichment. After decades of betrayal and mutual mistrust, one must understand that Iran won’t accept any solution which would make it dependent on Western technology. The Iranian position here is very clear. It would be helpful in further discussions when the West understands that the red line, i.e., abandonment of uranium enrichment, cannot be crossed. On the other hand, Iran has to make clear that it does not threaten any country, not even Israel.
Of course, there is obviously much propaganda here but when the Iranian President Mahmoud Ahmadinejad visited the nuclear plant in Natanz in April this year and inspected the new centrifuges, he left the mark of a curious child which had got somehow lost in the deep forest. That doesn’t make him more sympathetic, of course. But a transparent enrichment program safeguarded by the International Atomic Energy Agency (IAEA) would not threaten anybody. That Agency under Director General Mohamed ElBaradei has to be strengthened, its indispensable work supported not sabotaged as was the case when Israel bombed an alleged nuclear site in Syria last September. 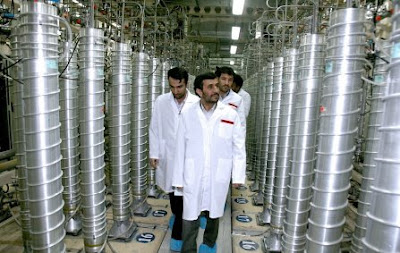