The Ikaros of the Persian Gulf 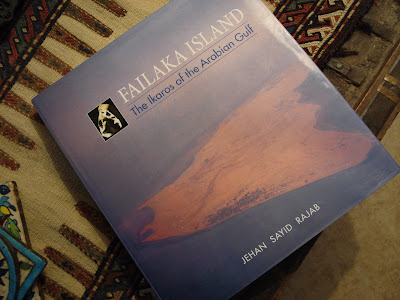 This is (almost) the title of a wonderful production of Tareq Rajab Museum, written by Mr. Rajab’s wife Sehan in 1999. When I had moved to Kuwait in 2001, the island, about 20 km east of the shores, mesmerized me from the beginning. Interested in the archaeology of the region, the at least two archeological sites there, one from the Bronze Age and a small Greek Temple dating to Alexander the Great, immediately attracted my attention. Amazingly, none of my new colleagues had visited the island and very few others I asked had ever been there. It was said that it was no longer inhabited since the Iraqi invasion and expulsion in 1991. I was told that there was a ferry boat from Ras Salmiya every now and then. So, I decided to make a trip on the first Eid holidays after I had settled in Kuwait. 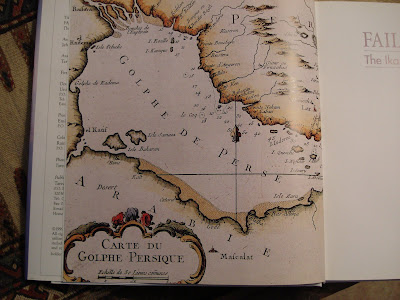 The Island was first mentioned by Greek geographer Strabo (d. 25 CE). The Greek, who had built an outpost on the island during Alexander’s conquest of Asia (336-323 BCE), called it Ikaros since its shape resembles that of Ikaria, an island in the Aegean Sea with just a similar shape, which is named after Ikaros, who, according to legend, fell upon it when the wax with which his wings had been fastened melted in the sun. 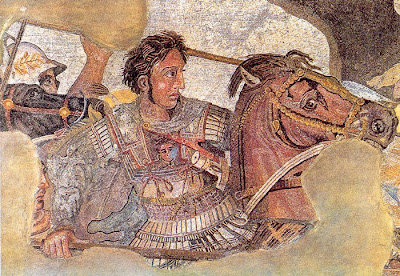 In the 1960s, a Danish team of archeologists began investigations on the island. They had been conducting excavations in near-by Bahrain where they had discovered the Bronze Age Dilmun Kingdom (which can even be traced to the Gilgamesh Epos). It turned out that the Bronze Age settlement on Failaka belonged to Dilmun. 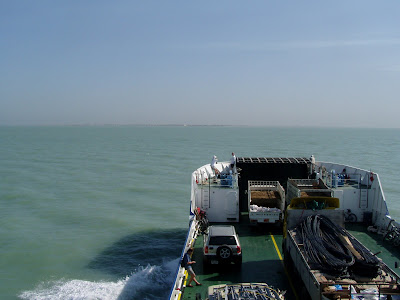 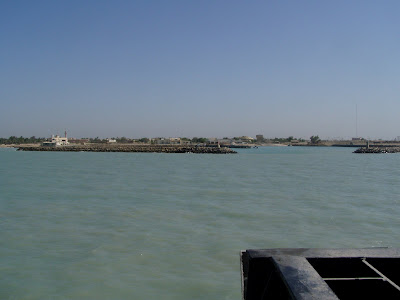 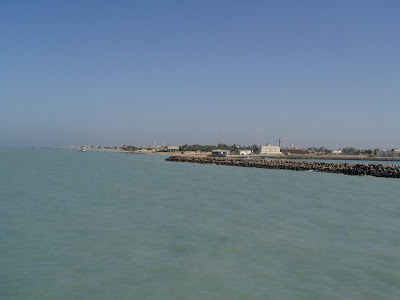 On my second visit two years later, we found the two main sites, that from the Bronze Age and the Hellenistic Temple, now lying in a fenced area. A guard had first to be found and asked for permission to enter. Exploring the ruins is worthwhile in any case. Another story may be the still rather depressing remnants of the Second Gulf War. Bullet-holed abandoned buildings, many desolate chalets, and rather dirty beaches do not invite visitors to stay there, say, overnight. The ferry usually departs at 3 pm already, so one has to hurry to see what can be seen. 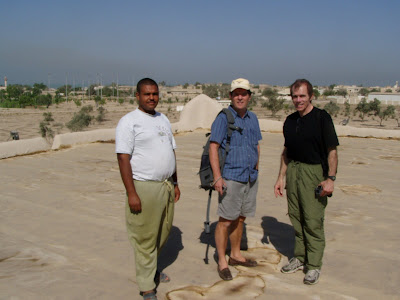 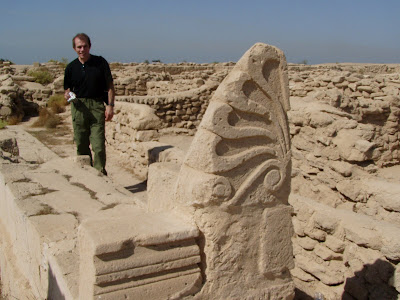 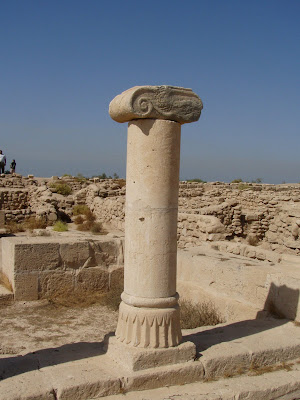 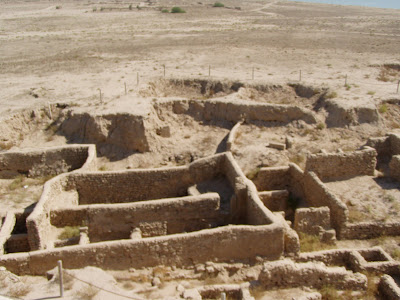 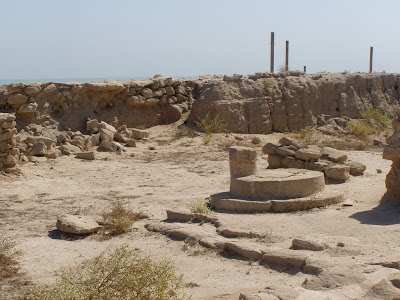 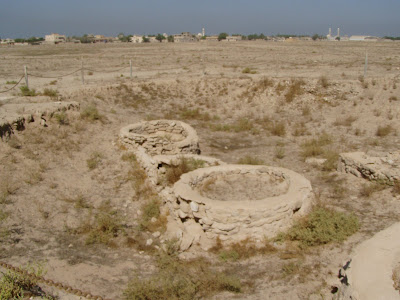 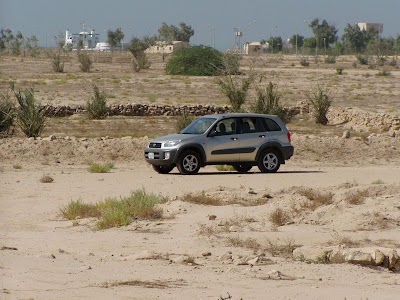 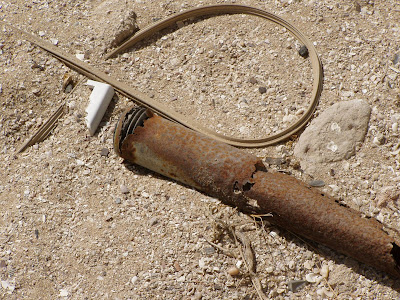 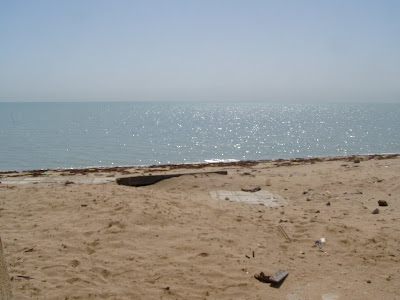 Jehan Rajab writes that unfortunately, “[n]ow Failaka Island is going through one of its periods of desertion, as its population of 5000 people was brutally thrown off the island in 1990 at the beginning of the invasion by the Iraqis. Hopefully the population will one day have the opportunity of returning and the island will once more come to life and thrive as it did before. Hopefully too, it will become possible to go ahead with more excavations, for it is obvious that much still remains to be discovered. An overall picture of interesting Kuwaiti and Gulf history can then continue to develop as missing oieces of a jigsaw come together and a clearer picture is revealed.”

There are new excavations, now involving a Slovakian team. A main focus is again the Bronze Age settlement at Al Khidr, north of Al Zour, Failaka’s tiny port. Since July 2007, another Greek team further investigates the Hellenistic past of Failaka Island.

As regard to repopulation, Jehan Rajab had repeatedly pointed to the great dangers of the Kuwaiti Government’s plans of building a tourist center on the small island. The delicate environment there including natural wells with fresh water, which has been completely destroyed during the short time of Iraqi occupation, can most probably not be restored. Due to double moral standards so commonly found among Arabs even alcoholic beverages might be served there, i.e., offshore, in order to attract both Westerners and locals. I read this in newspapers before leaving the Middle East. Friends have already visited a new hotel which has been built in the meantime on the island.
Posted by Muller at 10:31

I've never been there. I think with the coming cooler times, it is time.

Jihan Rajab has written some of the most insightful and caring books about this part of the world, hasn't she? Her book "Invasion of Kuwait" brought the whole invasion and survival during the occupation to life for me, the horrors, the tragedies, and the courage it took just to live daily life as a Kuwaiti.

Mr. and Ms. Rajab's books have, in fact, inspired me a lot for doing this picture blog.

The most stunning project (apart from their marvellous main museum) is, by the way, their new museum on Islamic calligraphy, which I had the opportunity to visit last year a couple of weeks before I left Kuwait for good. Very recently, BBC World's Middle East Business Report was produced in the museum.

We visit it often. We like to go when no one else is around, so we can watch that entire movie about calligraphy, how the ink is made, how the pens are cut - it is all fascinating stuff to us. And then to wander around and see the creativity that has been employed to create such works of wonder using the Arabic script(s). Wow.