I have recently reported on my visit of Pir Bakran near Esfahan and its very old Jewish cemetery and a small but still active synagogue. Recent distressing strong rhetoric of the Iranian president but also the response of a highly-ranked Israeli politician (not to mention new remarks of outgoing Bush and presidential hopeful Obama) augur badly. Remember, Jews and Persians have lived most of the time in harmony, even under Islamic rule. Presently, the Jewish community in Iran (of course less than 40'000) is the largest in the Middle East outside of Israel. Representing a minority (like Zoroastrians), a Jew is also a member of the Iranian Majlis. So, the abject rhetoric is definitely (and fortunately) not directed to Jews as a people or religious group.

As a matter of fact the canonization of the Tanakh was accomplished under Persian rule, in particular in the first half of the two centuries of the Achaemenian Empire (539-330 BCE). Most interested in the millennia-old history of the Persian nation and rather recently inspired by a social and historical treatise authored by Jon Berquist (Judaism in Persia’s Shadow), I am going to post in the coming weeks some interesting pictures of my visits in Persepolis near Shiraz and other Zoroastrian sites in Yazd and Esfahan.

The Tanakh and the Old Testament of the Bible are not as old as many might believe. Major parts of the work have been written and compiled when the Jewish elite and many officials were either deported to Babylon (already in 597 BCE; the temple in Jerusalem was destroyed one decade later) or, after their return to Jerusalem, Yehud (the Persian name for Jerusalem and its environs) was a vassal of the then ruling Empire, Persia.

Even before that, Judah was rarely an independent state. It was rather dominated by the larger powers Assyria (who besieged Jerusalem in 701 BCE), Egypt, or Babylonia. Israel, the other nation in the area with its capital Samaria, had been destroyed by Assyria already in 722 BCE.

Babylonia deported Judah’s intelligentsia. Jewish rural life in Babylon is mainly portrayed in the Book of Ezekiel while Deutero-Isaiah (Isaiah 40-55) describes Jewish life in exile when involved in governmental activities and bureaucracy. In fact, their special talents made life apparently rather comfortable in the Diaspora. The Book of Daniel reports on four young Jewish aristocrats who stayed at Nebuchadnezzar’s court for a life-time service (with obvious reminiscence to the story of Joseph in, for example, Gen 41). What is thought to be Daniel’s tomb is located in the city of Shush (the ancient Susa) in Khuzestan which is just to the northeast of Kuwait. Jewish pilgrims from around the world still visit it. And Iranian Shiites revere him and his shrine, too. 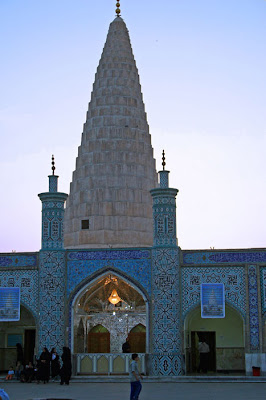 Babylon’s general custom of deporting the administration and all aristocrats of conquered countries, i.e., the centralization of imperial power, does not mean, however, that the common people have not still inhabited, for instance, Judah. It made, however, the periphery of the Babylonian Empire too volatile, and it was only few decades later (539 BCE) when the Achaemenid emperor Cyrus II defeated Babylonia.

Cyrus’ administrative style was completely different from that of the former rulers in Babylon. The priesthoods of several peoples regained their former strength and regional governors were allowed to stay in place. In fact, Cyrus sent the Jews home and ordered them to rebuild the temple in Jerusalem (Ezra 1, 2-4). Cyrus’ edict is found on the inscriptions of the so-called Cyrus Cylinder which was placed under the walls of Babylon as a foundation deposit. It asserts the following:

I returned to (these) sacred cities on the other side of the Tigris, the sanctuaries of which have been ruins for a long time, the images which (used) to live therein and established for them permanent sanctuaries. I (also) gathered all their former inhabitants and returned (to them) their habitations. Furthermore, I resettled upon the command of Marduk, the great lord, all the gods of Sumer and Akkard whom Nabonidus has brought into Babylon to the anger of the lord of the gods, unharmed, in their (former) chapels, the places which made them happy.
May all the gods whom I have resettled in their sacred cities ask Bel and Nebo for a long life for me and may they recommend me (to him); to Marduk, my lord, they may say this: “Cyrus, the king who worships you, and Cambyses, his son, …” … all of them I settled in a peaceful place … ducks and doves, …. I endeavored to fortify/repair their dwelling places… 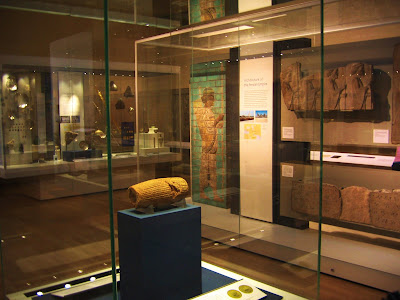 While Cyrus was generous to those who he had conquered, he ensured, at the same time, loyalty in the periphery of his Empire and maintained functioning administration. The order to the Jews of building a new temple in Jerusalem would not only allow worship of Yahweh but also restore the administration in the western colony of Yehud.

Cyrus' mausoleum is located in the wide plateau of Pasargadae, about 100 km northeast of Shiraz in the province Fars, the heartland of the Achaemenids. It is a modest copy of a Mesopotamian ziggurat. No inscription was actually found in the tomb chamber, but legend has it that Cyrus exhorted possible visitors by:
O man, whoever thou art, from wheresoever thou cometh, for I know you shall come, I am Cyrus, who founded the empire of the Persians.
Grudge me not, therefore, this little earth that covers my body. 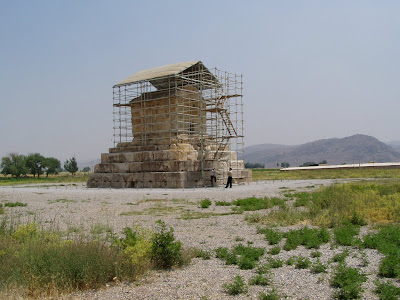 Alexander the Great looted and burnt Persepolis first, but when he then headed to Pasargadae, he paid a visit to the tomb and honored the Great Cyrus, it is said.
Posted by Muller at 19:28