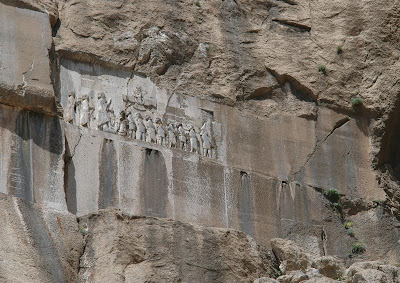 Cyrus II encouraged the Jews in Babylon to rebuild the temple in Jerusalem, knowing well that imperial generosity will grant stability in the empire’s periphery. It is interesting to note that the Jews declined. Too comfortable had life been in the Diaspora, several generations under better circumstances than in Judah. It was Darius I (522-486 BCE) who ordered the construction of the temple, as a fortress, as a proper place for administration, and, of course, to worship Yahweh. Yehud was, after the conquest of Egypt, no longer a marginal province. Darius appointed Zerubbabel as local governor who was a Davidide. This period is covered in the Tanakh in the Books of Haggai, Zechariah 1-8, and Isaiah 56-66 (the Third Isaiah). Darius’ strong influence as a lawgiver who respected local laws (see, for instance, his carved-in-stone, multilingual inscriptions in Behistun) expedited the canonization of Yehud’s religious texts, of course.

For the short period between Cyrus and Darius, Cambyses II, son of Cyrus, ruled for almost a decade Persia (530-522 BCE). It was a time of stability and stagnation in Yehud since Cambyses was more interested in conquering Egypt, but from the sea. Troops did not pass Palestine. Cambyses’ army was lost in a devastating sandstorm when heading to the oracle of the Siwa oasis in western Egypt. About 50’000 men vanished literally from the face of the earth. Recently, archeologists may have found the remains of the 2500 years old campaign, preserved in the sand of the desert. Two hundred years later Alexander the Great dared to repeat the enterprise and was allegedly greeted there as the son of Zeus.

Cambyses tomb was very recently discovered in Parsagadae near his father’s mausoleum.

Let’s come back to Yehud’s history as a colony of the Persian Empire. Under the rule of Xerxes I (486-465 BCE), i.e., after Darius, Persian support for Yehud declined again considerably. In contrast, increasing armed hostilities at the western borders (Greece) and his march to Egypt in 485-484 BCE when he went through Palestine twice took its toll. Moreover, the systematic divestiture of any local autonomy has to be seen as particular contradiction to his predecessor Darius.

Artaxerxes I (465-423 BCE) appointed as governors in Yehud Ezra and Nehemiah, who were able to re-establish something like a careful autonomy in the colony under central control of Persia, of course. It was in particular Ezra who undertook the task of a thorough reform of Yahweh’s religion. Darius had, some 50 years before, codified the ‘King’s Law’ which had been implemented throughout the Empire. Ezra, a loyal but most probably lower-level Persian bureaucrat, had to unify Yahweh’s religious laws with those of the Emperor (Ezra 7:26).

It is highly significant that it was Persia’s central administration which appointed these governors in Jerusalem, Zerubbabel, Ezra, and Nehemiah. Their main task was the implementation of the King’s Law in the colony of Yehud. The traditions, religious laws, worship of Yahweh, all had to be streamlined in a way that would fit with Persian rules, regulations and laws. Definitely, the influence of Zoroastrianism as the state religion in the Persian centers Susa, Ecbatana, and Persepolis, was strong. The great tolerance of most Persian Emperors especially in religious matters granted, however, considerable freedom in particular when the temple in Jerusalem had finally been rebuilt, and refurbished by Ezra. The temple was undoubtedly the center of worship of Yahweh, but what was even more important to the Persian Empire, for administration and defense.

Thus, it is more than amazing that the real origin of the nowadays three monotheistic religions, Judaism, Christianity, and Islam, lies definitely in Zoroastrian Persia.
Posted by Muller at 18:57