Raiders of the Lost Ark

When I recently visited Yemen, I had read about a sensation which had happened more than 30 years ago. When restoring parts of the Grand Mosque in Sana’a in 1972, workers stumbled in a small niche between the outer and inner structure of the roof across fragments of paper manuscripts. Careless as they were, they packed the pages into potato bags and subsequently forgot about them. Years later, the president of the Yemeni Antiquities Authority, Qadhi Ismail al-Aqwa’, realized that he had to ask for international assistance to study what is now known as one of the oldest versions of the Holy Qur’an. It was the German Qur’anic paleographic Gerhard R. Puin who started the restoration of the tens of thousands of fragments of the Holy Scripture. Little has been published in the meantime since the message might be too disturbing for the common faithful Muslim. See the article by Toby Lester in The Atlantic Monthly here. 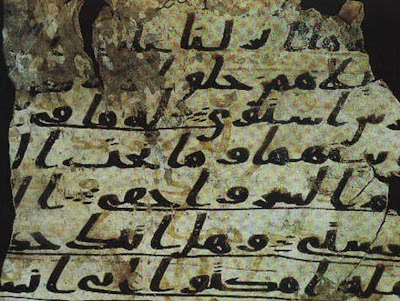 In upcoming August, there might be another heavy dispute about the hidden origins of Islam. The German Professor emeritus Karl-Heinz Ohlig and G. R. Puin are going to make their so far only in German distributed Book available in English, then providing the general public with a highly controversial compilation of texts by different authors. Some of them have started to linguistically analyze the text as being Syrian-Aramaic and re-read parts of the Holy Qur’an in a completely different way. In the publisher’s announcement of The Hidden Origins of Islam, it reads as follows:

“The standard histories of Muhammad and the early development of Islam are based on Islamic literature that dates to the ninth and tenth centuries--some two centuries or more after the death of Muhammad in 632. Islamic literary sources do not exist for the seventh and eighth centuries, when, according to tradition, Muhammad and his immediate followers lived. All that is preserved from this time period are a few commemorative building inscriptions and assorted coins.
Based on the premise that reliable history can only be written on the basis of sources that are contemporary with the events described, the contributors to this in-depth investigation present research that reveals the obscure origins of Islam in a completely new light. As the authors meticulously show, the name "Muhammad" first appears on coins in Syria bearing Christian iconography. In this context the name is used as an honorific meaning "revered" or "praiseworthy" and can only refer to Jesus Christ, as Christianity was the predominant religion of the area at this time. This same reference exists in the building inscription of the Dome of the Rock in Jerusalem, built by the caliph `Abd al-Malik.
The implication of these and other findings here presented is that the early Arab rulers adhered to a sect of Christianity. Indeed, evidence from the Koran, finalized at a much later time, shows that its central theological tenets were influenced by a pre-Nicean, Syrian Christianity. Linguistic analysis also indicates that Aramaic, the common language throughout the Near East for many centuries and the language of Syrian Christianity, significantly influenced the Arabic script and vocabulary used in the Koran. Finally, it was not until the end of the eighth and ninth centuries that Islam formed as a separate religion, and the Koran underwent a period of historical development of at least 200 years.” 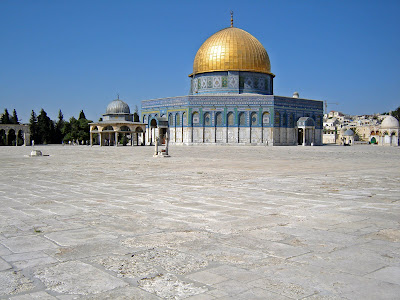 I have read the original German book from 2005 about the hidden origins of Islam (and its sequel from 2007) with much interest. Even in Germany, the book was perceived very controversially. Famous German orientalists Tilman Nagel and Angelika Neuwirth criticized the approach of, in particular, Christoph Luxenberg, and his new interpretation of the oldest still visible Qur’anic inscriptions on the Dome of the Rock in Jerusalem may in fact be very peculiar. As an example, Luxenberg reads muhammad and abdullah not as nouns but rather gerundives (the praised one, the servant, respectively) and assigns both to Jesus (Isa bin Maryam) rather than to the Prophet of Islam, Muhammad. Belonging mainly to the revisionist party, most authors of the compilation cannot really be considered scientifically serious but rather striving for sensation. One typical example might be ‘hobby’ numismatic Volker Popp with his peculiar interpretations of coins found in the 1st and 2nd century AH. That coins which were once circulating among inhabitants of a particular region are not radically exchanged under new reign is so self-evident that it does not really deserve special attention.

Anyway, the book will undoubtedly incite new discussions, this time among an international audience.
Ohlig KH, Puin GR. The Hidden Origins of Islam: New Research into Its Early History. Prometheus Books (August 2008)
Posted by Muller at 19:36