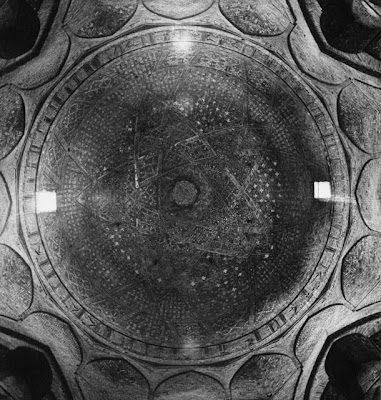 From a mainly architectural point of view, Esfahan contains one of Islam’s most significant buildings, its marvelous Masjed-e Jomeh. As Oleg Grabar puts it in his wonderful book, one might rightly consider Esfahan’s Great Mosque as the “Chartres of Iran”. In terms of importance it has been compared, for example, with the Haram al-Sharif in Jerusalem, the Umayyad Mosque in Damascus, Cairo’s Ibn Tulun Mosque, the Alhambra in Granada, Istanbul’s Süleymaniye, or the Taj Mahal of Agra.

Of course, Esfahan is rich in stunning architectural sights, and as a matter of fact, Shah Abbas’ the Great (d. 1629) celebrated and majestic Safavid ensemble of a huge square, two magnificent mosques, and the gorgeous Ali Qapu palace, which is located in the modern city center, attracts much more attention of tourists and visitors. Esfahan’s Great Mosque is located about one kilometer to the northeast and may be reached while strolling through the city’s famous main bazaar. At first glance it seems to be humble and rather hidden albeit the entire complex clearly dominates the old city, the Great Seljuq Empire’s capital.
Read the rest of this article»
Posted by Muller at 13:18