The Mouth of the Whale 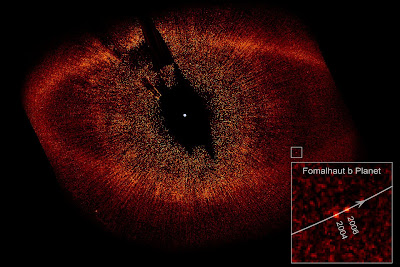 Fomalhaut is Arabic and means the 'mouth of the whale'. فم الحوت , or fum al-ḥawt. It is one of the brightest stars of the southern hemisphere and belongs to the constellation Piscis Austrinus. With the aid of the Hubble Space Telescope it was proved that, in its disc of dust, a planet is underway. Pictures taken in 2004 and 2006 show some movement. It is for the first time that astronomers have directly visulized an extrasolar planet. Read further information here.
Posted by Muller at 19:46