“He always wants to go to places I have never even heard about!” Madame Hanan in the Salmiya office of Alghanim Travel did not really complain to the fat Kuwaiti lady sitting in front of her with her two daughters. It was Ramadan, and the office had opened again late. “Yazd!” the fat lady replied. “I’ve never heard either.” “Well,” I tried to explain, “it’s the center of Zoroastrianism in Iran, don’t you know?” She didn’t. I talked about fire temples, eternal flames. An ancient religion, much older than Islam. “So what?” she asked me. “That is why you want to go there? Do you really want to see that? Worshipping fire?” It was hopeless. Madame Hanan made the fat lady's reservations while her daughters started staring at me.

I loved these late evening visits at Hanan’s office, close to the Al-Qana’a Towers, my residence. I spent hours there, and my destinations always turned out to be an extra challenge for Hanan. She was from Palestine and I could feel the pain when she talked about her lost home country and the harsh life in Kuwait. Kuwaitis had not always treated Palestinians well, especially not after the liberation of the tiny country during the 2nd Gulf war. Better not to go into details here! There were too close connections between Palestinians and Saddam at that time. Later, when the fat lady with her beautiful daughters had left the travel agency, Hanan whispered that they were royals!

Madame Hanan was eager to make always all reservations for me. Not only for the flight to Tehran (she always pronounced it like Dhahran, and I had to tell her that I don’t want to go to Saudi Arabia), but also the domestic flights, hotel reservations, everything. So, I decided to buy the connecting flight ticket to Yazd one day after my arrival in Tehran and a reservation for one night at Tehran's Kowsar Hotel. Hanan was unable to book any hotels in Yazd.

Kuwait Airways has not really the reputation of belonging to the finest airlines in the world. How many hours did I spend at the headquarters downtown waiting for getting the flight tickets in return to University’s vouchers! Usually, two of the twelve or so counters were open for up to 100 customers. I often made friends with other expats there and then we had a kind of picnic at noon. Well, I missed the domestic flight and had to pay for another night at Kowsar. The scheduled flight had been cancelled when I came to the airport for checking in. Too few passengers wanted to go to Iran on the Eid. No notice, no regrets. Of course, no compensation. Just for information. “Come tomorrow. Same time!” the charming lady at the check-in counter told me. 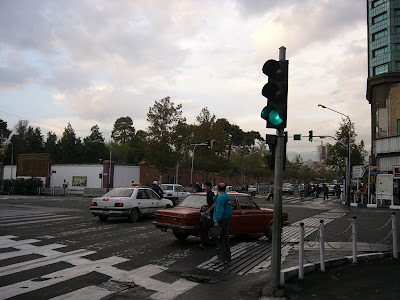 One day in rainy Tehran can be boring. I had to go to Mehrabad Airport and try to get a new flight ticket to Yazd. The taxi driver was helpful. So, with some negotiations, he managed that I had not to buy another ticket. Very early in the morning, my journey into the heart of Iran continued. I will report soon.
By the way, what happened to Madame Hanan? I really don’t know. She was first moved to the main office of Alghanim Travel downtown. Then she quit. She tried to join Villa Travel in Sha’ab, and I went there many times thereafter. Unfortunately, I never saw her again. If anybody reading this blog comes to meet her in Kuwait, please tell her my best regards!
Posted by Muller at 10:48

I am so happy to visit this plog

I will add it to my blogreader

wish you all the best and to find your Madame Hanan
:)