A Kurdish Kilim from Khorasan

Kurds are not only living in Turkey, Iraq, Syria, and northwestern Iran. Shah Abbas I (d. 1629) had moved about 15’000 Kurds to the northeastern borders of Khorasan as protection against Uzbek and Turkoman invasions. As their folks in Kurdistan, these so-called Kordish people in northeastern Iran weave pile carpets, kilims and soumaks. The colorful carpets show typical geometric designs displaying octagons, hooked squares, and a star design, called naqsh-e setare (not in this piece), and knots are symmetric. So, it is no surprise to see characteristic colorful rugs and flat weaves of Kurds for example in the carpet bazaar in Mashhad. 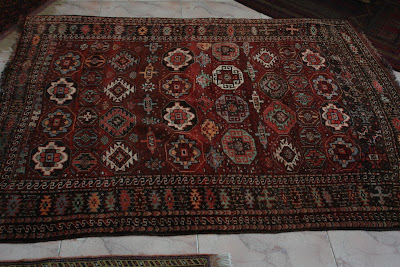 The kilim here (59 cm x 145 cm) is a nice example indicating different techniques of flat weave. When bought a couple of years ago, it was new. Four intensively orange major bands are separated by colorful stripes displaying arrow heads. They themselves are bordered by narrow black stripes with various, very delicate patterns of vines, zigzag bands, squares, etc. 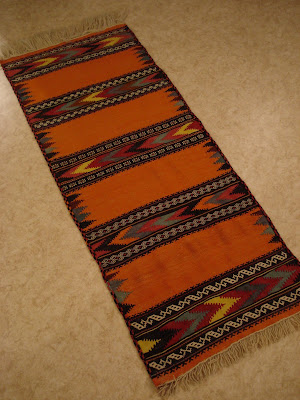 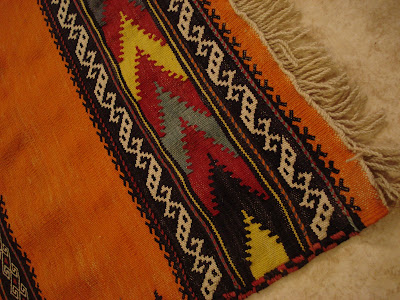 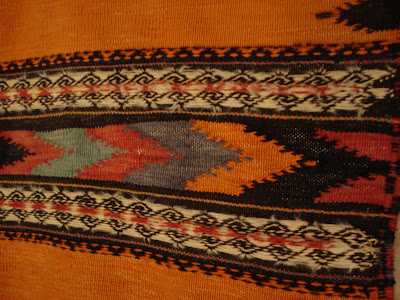 A Carpet from the Safavid Era