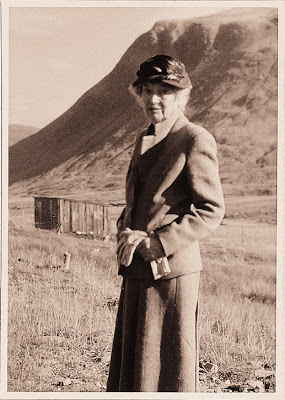 I was somewhat hesitant to post this photo which shows Lady Evelyn Zainab Cobbold. She is featured in a wonderful article in the new issue of Saudi Aramco World. Lady Zainab was the first Scottish Muslim woman who conducted the pilgrimage to Islam's holy city in 1933, at the age of 66 or so. It is in a way touching to read about her life, that she always felt to be a Muslim (so, she never converted), and about her spiritual exaltation when eventually being part of the crowds of the faithful in Makkah.
I have got some impressions of spritual mass phenomena when having visited certain holy shrines in Iran, for example the Hazrat-e Masumeh in Qom and the holy shrine of Emam Reza in Mashhad. I experienced a stark feeling of being a complete outsider, and deep inside I felt a kind of regret (but I certainly would not embrace Islam). Being not religious does not mean that I won't be susceptible for deep spiritual thoughts and experiences.
It is a pity (but in a way understandable) that Muslims would never allow non-Muslims to visit their sacred city in Arabia.
Posted by Muller at 14:59