The 3-million city of Mashhad in the northeastern corner of Iran has virtually no history unrelated to the Holy Shrine of Ali ibn Musa Al-Rida. The Eighth Shi’a Imam, Reza as he is called, died in 818 CE (203 AH) in the ancient city of Tus nearby. According to Shi’a beliefs, he was poisoned by the Abbasid Caliph Al-Ma'mun, the son of Harun Al-Rashid, whose mausoleum is in nearby Tus. Imam Reza’s resting place in the small village of Sanabad was soon attracted by pilgrims since there was a saying that a pilgrimage to Imam Reza’s tomb would outweigh 70’000 visits of Makkah. And gradually the city of Mashhad, literally “place of martyrdom”, developed. 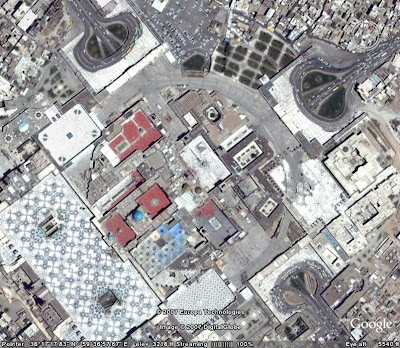 Al-Rida’s tomb is one of the most significant places for veneration and worshipping of Shi’a muslims outside Iraq. The huge circular island in the center of Mashhad is under permanent major construction since the Islamic Revolution in 1979. From space (which might actually be the best way to get a complete overview of the site) you can see that several courtyards of the Astan-e Qods Razavi are covered by hundreds of mainly red carpets. 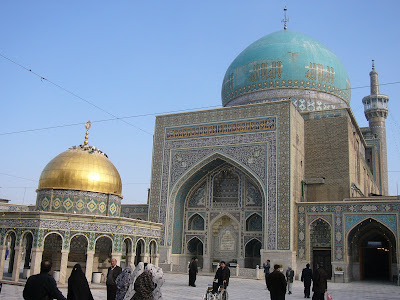 The complex, or haram, is dominated by the two major buildings, the Holy Shrine of Imam Reza and the fine Azim-e Gohar Shad Mosque both from Timurid era. They were commissioned by Gohar Shad and designed by the famous Qavam ad-Din bin Zayn ad-Din Shirazi in the early 15th century. (The Darb-e Eman in Esfahan with its bulbous domes on high drums is another example that Timurid architecture was not confined to Transoxiana, for example in Samarqand or Bukhara.)

Gohar Shad was the wife of Timur Lenk’s (Tamerlane) eldest son Shah Rokh, who was residing in the city of Herat in what is now Afghanistan. It was under Gohar Shad's influence that Persian language and art became central elements of the Timurid dynasty. It is amazing that architectural masterpieces were built in Persia by Timurids only a few decades after Tamerlane’s sacking of Esfahan in 1387 where he built a pyramid of 70’000 skulls of the unlucky Esfahanis and took along a large company of architects, artists, scholars, painters, and craftsmen. 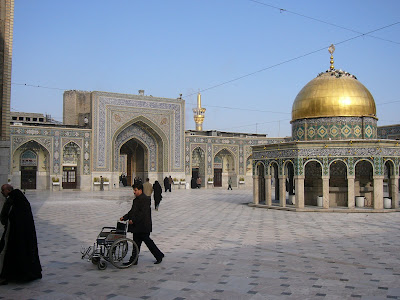 The ablution fountain in the main courtyard is a small copy of the Dome of the Rock in Jerusalem.

My Kuwaiti friends visited the Holy Shrine each evening after 11, definitely too late for me. So, early Saturday morning I entered the huge complex by myself. There were many sick people in wheel chairs. I managed to come close to Imam Reza’s gild Shrine within only five minutes or so. I did not enter the special room since the faithful kneeled before passing the door, and the room was overcrowded with pilgrims touching and kissing the Shrine. 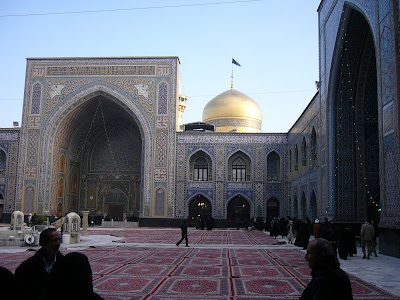 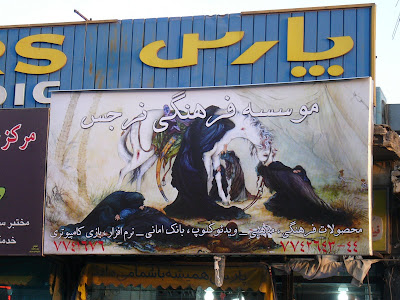 Apart from these two significant buildings, the complex consists of museums, iwans, madrasehs, libraries, and a vast cemetery. The carpet museum contains some of the most stunning pieces of carpet weaving art in Iran. In the main museum, the work of contemporary Iranian artist Mahmood Farshchian is featured including the dazzling Fifth Day of Creation and famous Afternoon of Ashura. I have taken a picture of a poster with that touching painting in the Holy City of Qom. It displays the mourning womenfolk of Imam Hossein when, after the battle of Karbala, his horse arrived without him at the camp. 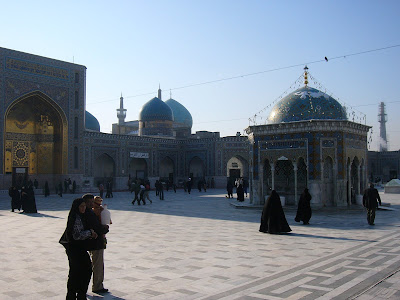 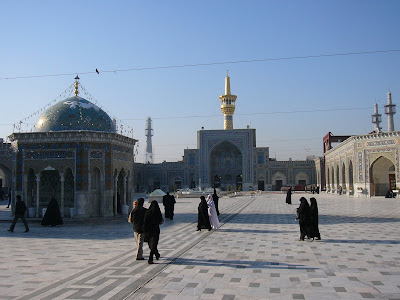 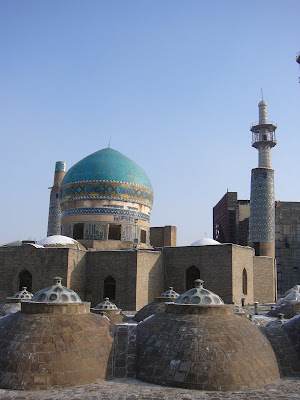 Before sunrise on December 30, the very day of Eid-e Ghorban, Saddam Hussein, the former tyrant in Iraq, was executed. The Kuwaitis congratulated themselves and decoration of the complex culminated as the holiday was celebrated in Mashhad. 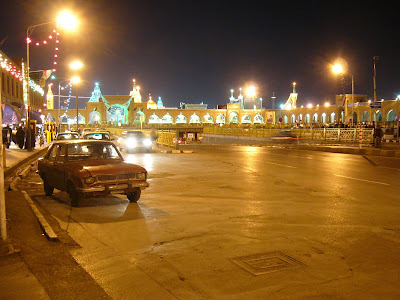