The Kuwaiti pilgrims who I accompanied on their visit of Mashhad last year were neither interested in the tomb of the great Iranian poet Ferdowsi nor in that of Harun ar-Rashid in the near-by village of Tus. Harun ar-Rashid, the Caliph of Baghdad, had poisoned the father of Imam Reza, Musa al-Kazim in 799 CE. In the West admired for developing art and science in the Islamic world and known for his correspondence with Charlemagne, whom he sent two albino elephants, Shi’as have grave resentment and disdain for his dissipated and sinful life style. Ferdowsi (935-1020 CE), on the other hand, is not really known among the Arabs. 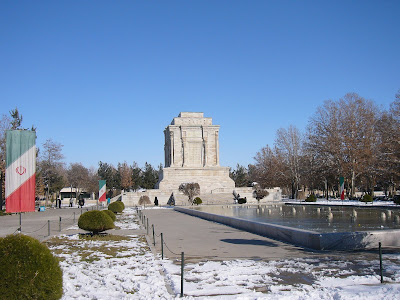 I had visited both mausoleums already in 2005. About Ferdowsi it is said that he preserved, in his monumental collection of pre-islamic national epics, called the Shahnameh, Persia’s language (Pahlavi) after the conquest of Iran by the Arabs in the 7th Century. His tomb, built by Reza Shah in 1925, evokes Cyrus the Great’s mausoleum in Parsagadae. The small museum contains many scenes of the life of Rostam, the mythical hero. 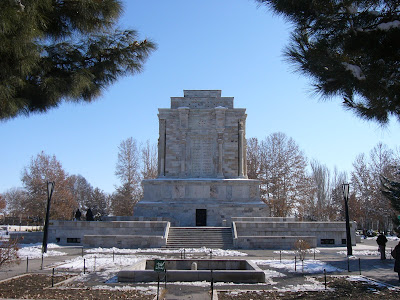 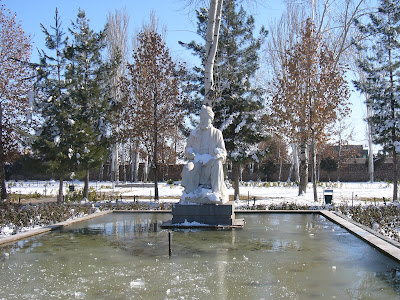 Tus was ransacked and vanquished by the Mongolians in the 13th century. There are some clay walls left, while some recent archaeological activities can be seen. Back to Mashhad we passed Harun’s mausoleum, a plain, unembellished building.

There is a carpet bazaar in Mashhad which I had not visited on my last trip in the summer of 2005. Looking for some authentic pieces, preferably old/antique Iranian Baluchis, I was referred to Mr. Abbas’ little shop. He had folded his pieces in the right way, pile inside. There were no spectacular rugs exposed to visitors. We chatted for a long time, about God and the World, I suppose. Iranians love to talk about politics, and it turned out that Mr. Abbas was an ardent devotee of the Revolution and even the current president. His younger son Ramin was with him in the shop, listening attentively to his father. Abbas mentioned that Iran is now the freest country in the world. While he looked over my surprised face, he explained. Iran is autarkic in any respect, the resources of the country are sufficient for supplying the people with everything. And while other countries completely depend on the United States of America, Iran does not. I haven’t thought about that so far, but I agreed in a way. At least a different kind of freedom as Westerners usually seek.

After almost two hours (and having finally agreed to having a cup of tea), I asked him whether he could also show me some of his carpets. It turned out that Mr. Abbas’ business was twofold. First, he is still collecting old and antique Baluchi carpets from the Mashhad area. Second, he provides women in the not-so-far villages in the mountains with high-quality handspun wool, which he dyes in his workshop with natural dyes for weaving authentic new Baluchi carpets. Customers, mainly from Europe and especially from Germany provide him with special designs. Most interestingly, he told me that the women in the villages have more or less lost their memories about the beautiful Baluchi designs. The longer I listened to Mr. Abbas (and I had more opportunities in the coming days since I was invited several time to his home), the more I was surprised to learn about nowadays’ tribal rug production in Iran. In his home, I saw a (new) carpet in the hallway whose design I was very familiar with. The original carpet was displayed on the cover of a catalogue of a famous exhibition organized by Peter Bausback in Mannheim in 1980 about Baluchi carpets, the first of its kind, I suppose. And Mr. Abbas owned even the catalogue.

The next day, January 2, 2007, I went with Mr. Abbas’ eldest son Sirus with the family’s Pajero to the villages. Sirus had new design templates and wool for the weavers and wanted to visit and talk to the women in the villages. It was a cold winter day. Sirus explained the pretty harsh life of the half-nomads in the vicinity of Mashhad. During the winter they seek shelter in houses but the rest of the year they live in tents. He stressed that the Revolution has brought the people there, for the first time, electricity and running water. We passed ancient hamlets where Sunni and Shi’a were living in different districts. When we reached the village, I was introduced to what was probably the mayor, an old man with a white turban, who kissed me on the cheeks and welcomed me cordially, the Almani Doctor. The young women in the houses were warned by calls of Sirus that males were approaching, so they had some time for covering their hair. Inside, we were welcomed. The generally young women were very curious. They discussed their work with Sirus who made some constructive suggestions. The looms had been placed horizontally on the ground, and sometimes they filled the entire room. Some husbands and fathers of the women approached, too. Several homes were visited before we returned to Mashhad.

On our way back, we saw two lads on the road desperately waving. Sirus was hesitant, his father had exhorted him not to take hitchhikers. But I convinced him that they looked harmless. We went back and picked them up. They told us that they had missed the bus to Mashhad and we gave them a lift.

On my several visits of his shop in the bazaar and his home Mr. Abbas introduced me to his big family. He told me wonderful melancholic stories of the old times when he was a young man. Many hippies had traveled to Mashhad at that time, the mid 1970s, who were on their way to Afghanistan for buying hashish or opium. He also showed me a photo album with old pictures of him, his wife, and their friends, some of them have become his customers now. In his workshop’s cellar he demonstrated the way of dying the wool for his carpets and showed me certain old pieces for sale. Mr. Abbas may be contacted by potential customers here.

Iranian Baluchi carpets have very dark colors and usually modest designs. They are rather small, frequently made for praying. But that doesn’t mean that they do not have a great variety of styles. Before leaving Kuwait, I bought in Feruz' little shop in the old Souq a special piece with a typical Dokhthar-e Gazi design made by the Timuri tribe in Western Afghanistan. It has a very high density of knots, I suppose 50 per square cm. The beautiful brown and dark blue of the ground field blends almost into green. The Dokhtar-e Gazi design is explained in some detail on this wonderful web page. 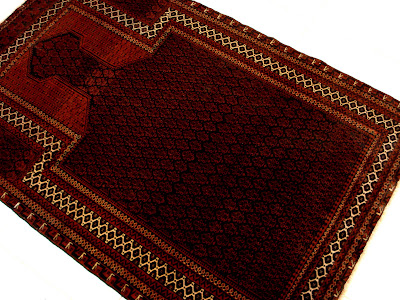 Another piece I bought there is most probably a Kurd-Baluchi (Ali Mirzai) from the Sarakhs vicinity. It shows the characteristic small cocks. Remember that Baluch means cock, or the comb of a cock. 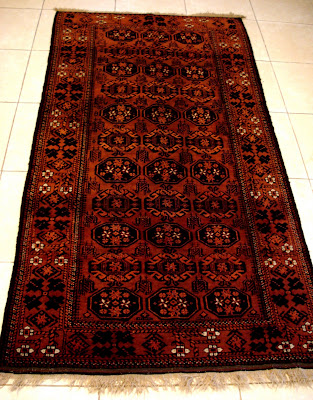