Persian Turquoise – Jewel of the Orient 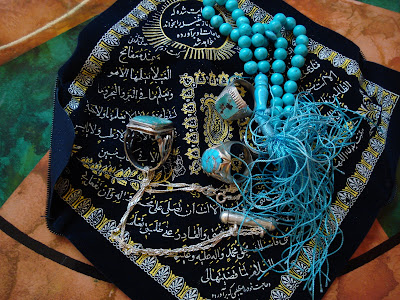 When visiting Mashhad in December 2006/January 2007, I joined a group of Kuwaiti pilgrims who visited the holy shrine of Imam Reza. The beautiful Azim-e Gohar-Shad and the shrine with the golden dome have been described elsewhere in this blog. On one occasion, we also went to the city of Nishapur, some 120 kilometers west of Mashhad. It is the old capital of Khorasan, Iran's most northeastern province and home of the famous mathematician, astronomer and poet Omar Khayyam (d. 1122) and sufi Fariduddin Attar (d. 1220), whose tombs I have seen there, too. I have also reported on that trip earlier.

Near Nishapur, Irans biggest turquoise mine can be found, and the city sports many turquoise shops. The beautiful semi-precious stone is regarded by many as the most typical jewel of the Orient. Unfortunately, the best pieces will be exported and are usually not shown or for sale in the small shops in Nishapur's or Mashhad's jewellery shops.
Posted by Muller at 14:03

ive been hearing about their caviar for so long

but they tell me u cant find good caviar in iran

You can find some beautiful photos of Iranian Turquoise here: