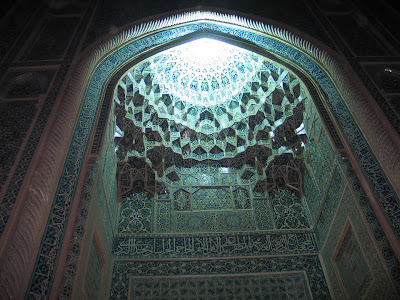 Pentecost might be the right holiday for asking this simple question: Can Christians, or even agnostics, be touched by verses of the Holy Qur’an? Yes, they can (we are not in Obama’s campaign here). Some years ago, when I had just moved to Kuwait, which is a very conservative Islamic country, I got a gift from my brother, Navid Kermani’s doctoral thesis about the beauty of the Qur’an. Its main topic (on a bit more than 500 pages) was, in particular, what Muslims know as i‛ğāz, meaning the miracle of the supernatural beauty of their Holy Book. I am quite convinced that he (my brother) has not read it, but on me it had a profound effect. It is, of course, a scientific text but easy to read and of admirably persuasive power. The effect was twofold. I first became interested in the Qur’an, and even religion at large. And then I detected that I am not really religious. The holy book I am more familiar with, the Bible, obviously lacks beauty and poetry, and Kermani, a German-Iranian orientalist, novelist, and journalist who is living in Cologne, is a master of explaining that particular (if you want) deficiency of the Book of the Books (I would still disagree spontaneously for certain parts, for example, the Sermon on the Mount, Matth 5-7. But being nearly overwhelmed by revolutionary ethics is somewhat different from being immensely touched by pure beauty).

Kermani comes to the (my) point on page 122 when he portrays, and tries to interpret, the famous Light Verse (Q24:35):

"God is the Light of the heavens and the earth.
The parable of His light is, as it were, that of a niche containing a lamp;
the lamp is [enclosed] in glass,
the glass [shining] like a radiant star:
[a lamp] lit from a blessed tree -
an olive-tree that is neither of the east nor of the west
the oil whereof [is so bright that it] would give light [of itself] even though fire had not touched it:
Light upon Light!
God guides unto His light him that wills [to be guided];
and [to this end] God propounds parables unto men,
since God [alone] has full knowledge of all things."

Ayat An-Nur is named after this verse, although the remaining revelations deal with completely different issues. Indeed, when I tried to get a comment from a dear Muslim friend on it, she became angry, for obvious reasons. But I only wanted some opinions about this special, mysterious, paragraph, in particular this “neither of the East nor of the West”. The English translation (here by Mohamed Asad) is, as all translations of, what is believed by Muslims, God’s words, insufficient.

As I learned later, especially this most famous verse in the Qur’an has guided so many mystics on their spiritual journeys!
Posted by Muller at 18:13