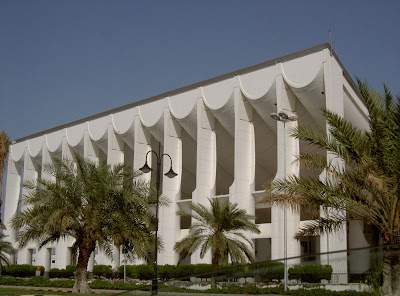 After the Amir, HH Sheikh Sabah Al-Ahmad Al-Jaber Al-Sabah, had disbanded the parliament earlier this year Kuwaiti citizens have today, after 2006, another chance of general elections. Election campaigning came to a halt earlier this week with mourning for the former Amir, Sheikh Saad Al-Abdullah Al-Sabah, who died on Tuesday.
In 2006, a lot of hope arose when women for the first time rightfully voted and even were allowed to run for parliament. A good sign, although it was generally agreed that it will take some time until they would succeed in gaining a seat.

The way the previous parliament dealt with important matters (as was reported in the media), this year’s election campaign developed in a quite comparable (very negative) way. Sad to say, it was mainly characterized by illegal primaries, riots, rumors of bribery and buying votes, and, in general, rather ugly disputes in the country. The previous constitution of parliament was dysfunctional not only in the eyes of the Amir, but whether things can improve is more than questionable. Results of the vote are unpredictable at the moment.

Democracy is utopia. Citizens have to fight for its implementation permanently. Times are not getting easier with new military adventures being prepared in the region and a final struggle for natural resources already appearing at the horizon. Although a tiny country, Kuwait should definitely take its responsibilities here. Its multicultural society is its strength, not weakness. Kuwaitis might understand easier that any Arab society can only function if the expatriate workforce is allowed to participate.

http://en.wikipedia.org/wiki/Politics_of_Kuwait
Posted by Muller at 09:00