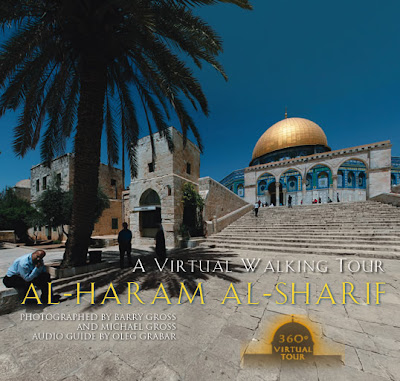 The current, as ever marvellous, January - February issue of the Saudi Aramco World Magazine contains a virtual tour through the Dome of the Rock and Al-Aqsa Mosque in Jerusalem, a site of great significance for Muslims (and maybe Jews and Christians, as well). For the first time, I could see the intricate and intriguing calligraphic inscriptions on the inner octagonal arcade, which are considered as belonging to the oldest Islamic inscriptions ever. It contains, apart from verses from the Holy Qur'an, strong polemic against Christianity, while stressing at the same time the Qur'anic doctrine that Jesus Christ, the son of Mary, was a true prophet. German scholar and professor for semitic and arabic languages Christoph Luxenberg had recently claimed that the text may in fact point to the Christian origin of the building.
From the January - February 2009 issue of Saudi Aramaco World:
"One hundred and fifty years ago, in 1859, M. J. Diness made the first known photographs inside Jerusalem's Al-Haram Al-Sharif ('Noble Sanctuary'). Ever since, photographers have sought to convey some of the rich spiritual, historical and esthetic meanings of the sanctuary complex and its more than 40 monuments. Digital panoramic imaging, which places the viewer inside a sperical photograph, now allows him or her to 'explore' by panning, zooming and looking up and down at leisure, and then moving on to the next panorama. The route of this 'Virtual Walking Tour', ..., enters the walled sanctuary precinct (the Haram) from the west to aproach the platform of the Dome of the Rock from one of its eight stairways. After visiting inside the Dome of the rock, it explores the northern end of the Haram, and from there it takes you to the Al-Masjid Al-Aqsa, the Al-Aqsa Mosque.
"Inside the Dome of the Rock, the tour offers seven panoramas, ..., of the decorated ceilings of the two concentric arcades that ring the Rock that lies at the center beneath the Dome. These coffered, gilded ceiling designs, made of wood and leather, highlight the building's history that is, like that of the entire Haram, both layered and, at times, uncertain: These are late-20th-century re-creations of Mamluk patterns dating from the 13th and 14th centuries that presumably replaced an original Umayyad ceiling from the late seventh century.
"According to Islamic doctrine, the single unhewn rock around which the Dome of the Rock is built marks the location of the Prophet Muhammad's 'isra ('night journey'), in which he miraculously traveled in one night from Makkah to the Al-Aqsa Mosque and, after leading Abraham, Moses, Jesus and other prophets in prayer, ascended from this Rock into heaven, to within 'two bowlengths' of the very throne of God. The Rock is also the spot where, according to tradition, Islam's second caliph, 'Umar, prayed in 637 following the largely uncontested Muslim conquest of the Byzantine-controlled city. Later, his successor, 'Abd al-Malik ibn Marwan, patronized the shrine's construction. Underneath the Rock lies this small cave, now used for prayer.
"The Virtual Walking Tour ends at the southern terminus of the center aisle of the Al-Aqsa Mosque. Here is the ornate qiblah wall indicating the direction of prayer toward Makkah, with its marble mihrab, or prayer niche. In the first years following the revelation of Islam to the Prophet Muhammad, Muslims actually prayed in the direction of Jerusalem until later revelation changed the qiblah to Makkah, and to this day Jerusalem is known to Muslims as 'the first of the two qiblahs'."