On my first day I woke up early. The muezzin was calling very noisily for the morning prayers. It was not even 5 o’clock. The very rhythmic, very decided, and clear call came from a tall minaret just opposite of my hotel. Different from what I was used to in Kuwait, where uninspired muezzins most probably from Bangladesh had been hired (Kuwaitis are even for that little task, calling for morning prayers, not well-motivated). The following days in Arabia Felix it happened that I would wait for ‘my call’ (I didn’t follow) every morning. 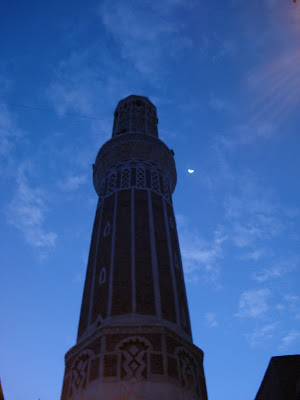 No way to get a breakfast that early. So, I decided to have an early walk through the old city of Sana’a. Most of the multi-storey houses (five, six or even more floors) were definitely old. Sana’a rightly belongs to UNESCO’s World Heritage. Some newer buildings were also tower houses. The limestone of many houses was carefully carved especially around the small windows with colorful stained glass. The lanes in the old city are lined by mud walls with beautiful views into orchards. Tree-large Bougainvilleas everywhere. Cobblestone pavements have replaced the previous stomped adobe. 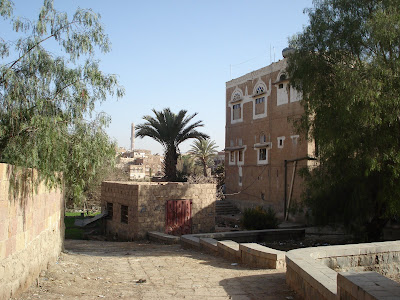 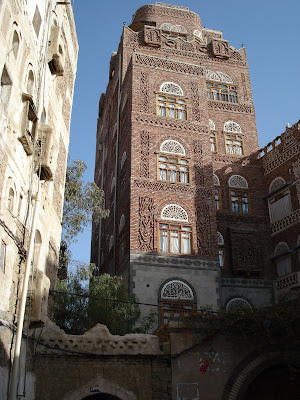 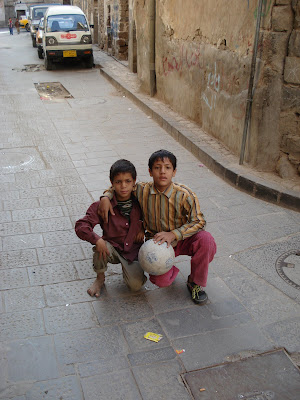 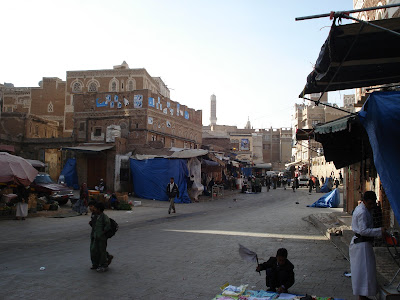 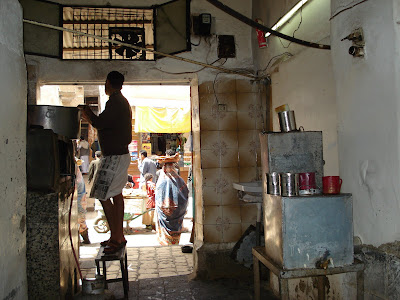 It seemed as if Mohammed had waited for me that early in the morning. Most probably he addressed any easy-to-identify tourist strolling through Sana’a. He wanted to talk, and then asked me whether I would mind visiting his house and have a tea and a little chat. I agreed and we walked through the labyrinthine alleys to the gate of an old building. He warned his wife (a foreigner!) before he found the keys in a niche above the wooden door and asked me in. It turned out that he was an engineer and had worked for some time in Czechoslovakia, in the 1980s when the southern part of Yemen declared itself the first Marxist state in Arabia, and collaboration with other Warsaw Pact states was close. It was a strange experiment, ending in a civil war and re-unification of the country (among others) in 1990. We drunk several cups of tea and Mohammed showed me his excellent professional references and admitted that he would like to live in Europe again. He introduced me also to his 18 years old son who could drive us to some interesting places in the vicinity of Sana’a. 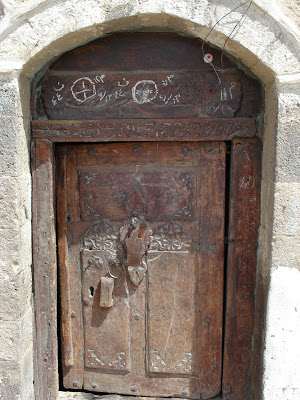 Next day, a Friday, we met as early as before and had a trip to Wadi Dhar. About 15 km northwest of Sana’a, the fertile valley is best overlooked from a famous lookout point where many people, mostly young couples had a picnic already. Springtime has broken out and most of the fruit trees were blooming in the wadi. The famous Dar al-Hajar could be identified and other small villages with more multi-storey houses. Dar al-Hajar has a spectacular location on a spire of a large rock. It is the impregnable summer residence of one of Yemen’s imams in the 18th century. Many European tourists visited with us the castle-like five-storey building, and Mohammed addressed most of them, introduced himself, waited for their response. We saw a bridal couple, and men, apparently belonging to the wedding party, round dancing and daringly waving their Jambiyahs. 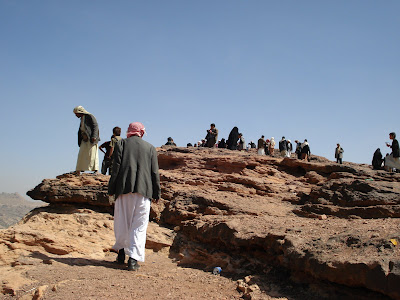 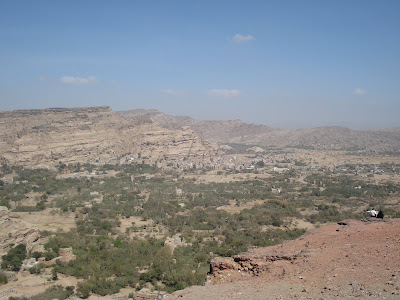 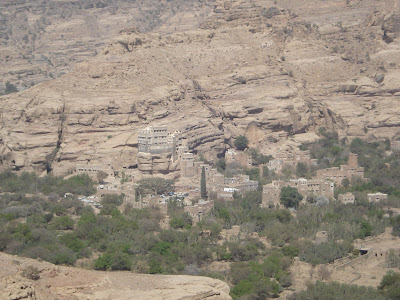 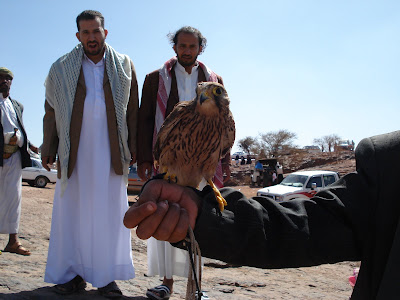 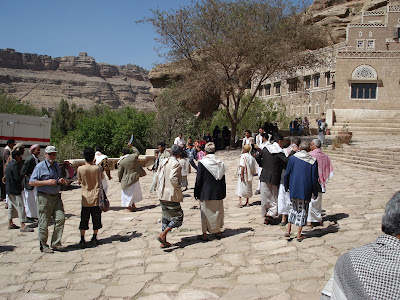 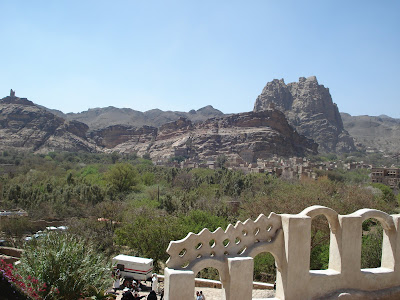 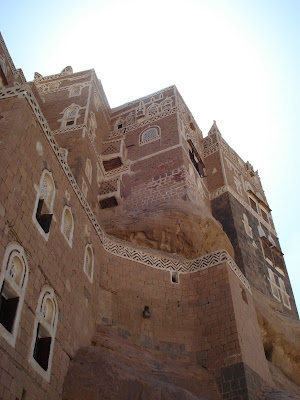 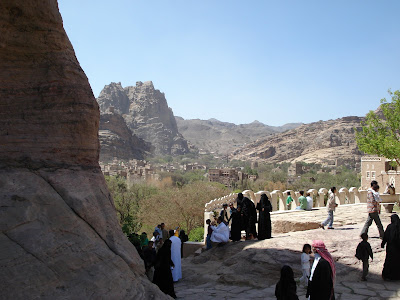 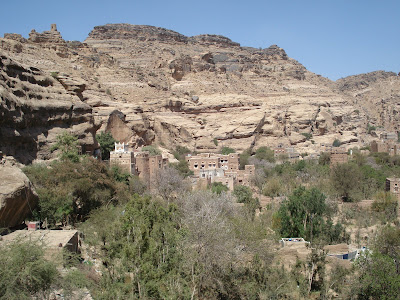 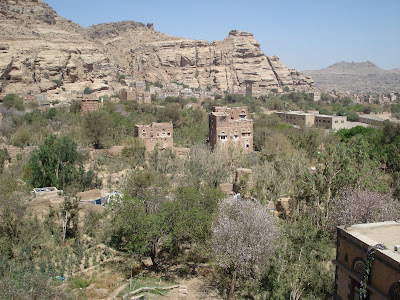 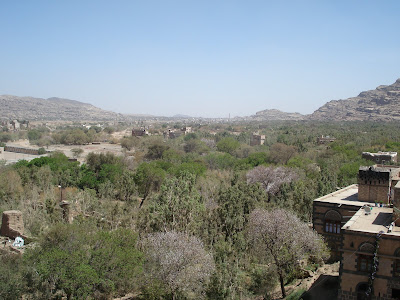 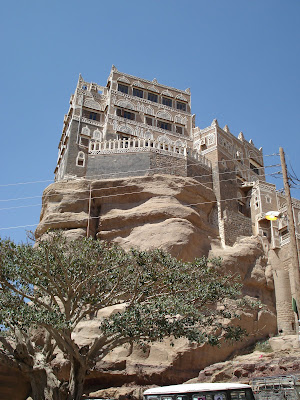 To get out of Sana’a was quite difficult. Mohammed took me the next day to the Ministry of Tourism (which had changed its location, so we had to ask many people in different areas of the modern city of Sana’a). Due to recent kidnapping (even killing) of western tourists, the government has established several checkpoints around Sana’a. Without official permission it won’t be possible to travel around. We had to fill-in many papers which we finally got, but Mohammed later apologized for not being able driving me to Kawkaban, which is located at an altitude of about 3000 meters. His wife, he told me, was much concerned about her family car, an older Pajero. So, he referred me with my papers to the hotel’s tourist office.
Posted by Muller at 11:14

I truely hope that you enjoyed your stay in Yemen and that you got to see a bit of the coutry. I am a European currently living here because of work, and though a bit stressed out at times due to the security concerns I am really enjoying it