Back From San Antonio

These days, the so far 3rd war (not the second!) in the Gulf region marks its 5th anniversary. The operation was called Shock & Awe and I was watching the bombing of Baghdad live on my TV in a flat in Kuwait. Incredible, Baghdad and its avenues at the Tigris river were brightly illuminated when the first bombs blasted! It looked more like a Hollywood movie. How could that be broadcast to the World? While we were sitting here in a totally dark, blacked-out Kuwait!


I really can tell, I was shocked and awed. We had spent the last days before the outbreak of war with shopping of the special kind, hoarding meat, tuna fish and vegetables in cans, getting large amounts of rice and noodles, buying candles.

Our former Faculty Dean had briefed the brave of us, who were about to stay, in one of the then rare Faculty meetings: There might be curfews in Kuwait. The Americans troops will be in Baghdad within 72 hours. University will be closed for a week or so. Life will go on. But the women were free to leave Kuwait for some time, of course.

A couple of days earlier, a Scandinavian colleague had proudly presented his gas mask which the German Embassy had lent him. Scandinavians do not have their own Embassies in Kuwait. When making a telephone call to the Embassy, the most helpful Ms Lorenz there, who had served the quickly changing German Ambassadors for 30 years or so, calmed me down. But maybe taping of the windows would be a good idea.

I had arrived from a scientific meeting in San Antonio already on the 12th of March 2003. I had made my final decision of coming back to Kuwait only at the airport in Frankfurt, when I had met our Vice Dean and another chairman of our Faculty. The three of us had the same thoughts but didn’t tell: Okay, these guys are also going back to Middle East!

The flight from Frankfurt to Kuwait City was horrible, a nightmare. The airspace was already closed over Iraq. Instead of taking the direct route from the Balkans, Turkey, Iraq to Kuwait, we had to fly over Jeddah at the eastern coastline of the Red Sea, then cross the whole Arabian Peninsula and Rhub Al Khali, then towards Bahrain, and then back to Kuwait. The plane was shaken by an enormous sandstorm between the tiny island in the Gulf and Kuwait and I almost had to say my final prayers. It was the first in a series of nearly weekly sandstorms which hit Kuwait later until May. 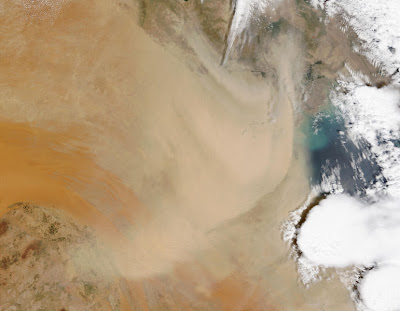 In Kuwait, it turned out that I had lost my luggage, and I had it back only after several weeks. Lufthansa had stopped flying to the Middle East, no way to go there during the war operations. I was promised, it would be safer in Frankfurt.

For one week we were advised not to drive in Kuwait by car, to stay at home and listen to any alerts. There were 20 or so, and one missile hit in fact the sea close to the Sultan Center in Souq Sharq. No casualties, fortunately. No poison gas either. Were there any shelters? We were at least not informed. Indeed, University was closed only for a week or so, and then life went on. The numerous, weekly sandstorms were most probably caused by military operations in the North. Embedded journalists (with questionable professional ethics) reported from what seems to be a big adventure every day. People in Basrah did not welcome the British troops, but when Baghdad was taken, we saw pictures of delighted inhabitants waving and dancing in the streets. An ugly statue of Saddam in Firdos Square was toppled already in early April. But Bush’s declaration of the end of military action on May 1, 2003 on aircraft carrier USS Abraham Lincoln (“Mission accomplished”) turned out to be an illusion. Abu Ghuraib, only one year later, changed everything. The emerging civil war in Iraq led millions of people flee to neighboring countries, if they could. Some said that about 1 million civilians have died in the meantime, but figures may have been overestimated. The Iraqi body count may be found here.

In the meantime, the head of the U.S. Central Command, Admiral William “Fox” (another desert fox) Fallon, has resigned after having given the Esquire an interview (which will appear next month). There were heavy disputes, of course, with the Commander-in-Chief on Iraq and Iran policies, and even with his General Petraeus, who had reported (and is about to report again) on the successful ‘surge’, gated communities in Baghdad, and a general better life in Baghdad and Iraq. Right now, presidential candidate John McCain visits the site, and soon Vice President Dick Cheney will arrive for respective celebrations.

What to say five years after the U.S.-led invasion to end years of dictatorship? We wish the Iraqi people a better future, honestly. And, the last the world could afford is another military conflict in the region.