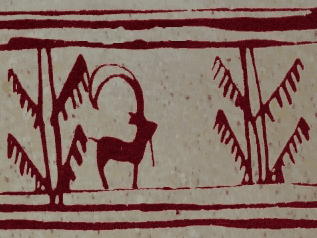 In an 11 minute documentary Iranian scientists presented what may be considered the world’s first flip-book. The five, 5200-year-old, drawings of a goat on a goblet could be set into rotation and then give the impression of a short moving picture: the wild goat (Capra aegagrus) jumping up to eat the leaves of a bush. The goblet was discovered in a grave at the city of Shahr-e-Sookhte (the Burnt City), at the banks of the river Helmand along the Zahedan-Zabol road, in the southeast province of Sistan. The settlement is part of the Jiroft civilization.The site is considered an archeological treasure trove.

The goblet is also featured on this Iran’s Press TV site’s article.
Posted by Muller at 15:11