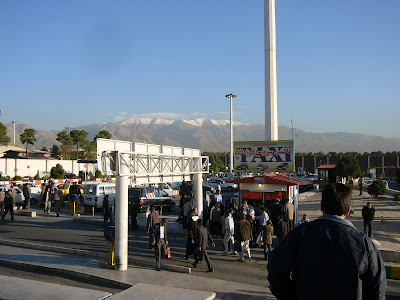 Tehran is buzzing, an exploding city of 14 Million. In very rare circumstances breathtaking and quite horrible air pollution from the exhaustion pipes of a million or so cars, and 2-wheel vehicles as well, may have been washed away by some rain showers giving sight to the marvelous snow-capped peaks of the Alborz mountains. Or even the near-by, 5671 meters high, sleeping volcano Kuh Damavand. It is a perfect cone, as that of Mount Fuji in Japan, but 3000 meters higher! Be aware of the taxi drivers at Mehrabad Airport in the very center of the city! They know their job well. Trust them as long as you know the difference between Riyals and Toman. And the true distance from one terminal to the other! In any case, if you have not an urgent appointment there, avoid that city.

Unlike on other occasions I arrived at Imam Khomeini International Airport on November 1, 2006. That modern airport had been finished in 2005 and it is a more or less empty place. It is located far outside the Capital.
Posted by Muller at 11:21