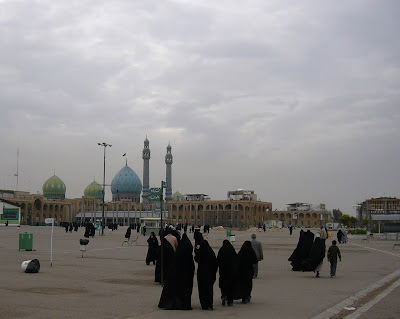 Six kilometers east to the center of the holy city of Qom, at the fringes of the great Dasht-e Kavir desert, lies the mosque of Jamkaran. It is a holy place where it is said that Mohammad Mahdi, the 12th Shi’a Imam, had appeared in 373 AH, together with Al-Khidr. There is a well where the faithful drop their letters with wishes and desires. Not from Jamkaran but Samarra in what is now Iraq, the Mahdi will reveal himself at the end of all time. One of the first acts of the government of the new Iranian President Mahmoud Ahmadinejad was to donate $10 million to the mosque in Jamkaran.
My visit of Jamkaran was mainly inspired by an article by Ulrich Ladurner in the German weekly DIE ZEIT from October 2006. Ladurner painted a most strange picture of Iran and the Iranians, emphasizing special features of Shi’a beliefs in the return of the Mahdi. The article conjured up a completely irrational society waiting, and indeed preparing for, an apocalypse. He argued that the current President of the Islamic Republic of Iran had promised the awaited return of the Mahdi during his term. It has to be noted that the Mahdi, by Shi’a belief, is the hidden 12th Imam, who will return only in a state of great injustice and in fact chaos and turmoil. In that context, Iran’s ambitious nuclear program would get another dimension since the West suspects Iran of building an atomic bomb and fears that Israel will be a first target.
Ladurner's article strangely demonized Iran as an inherently evil dictatorship, in which people follow apocalyptic visions. It was supplemented with rather weird and unprofessional snapshots of boys, women in chadors, and some men who submitted extreme religious feelings at the particular well where the faithful dropped little pieces of paper with their most intimate wishes and desires. In a first response I mailed a comment in which I doubted that it was well-investigated. In fact, it turned out to be the first in a series of articles with the intention to incite a discussion in Germany in which the people were prepared for an upcoming military conflict.
When I visited the place there was nothing special, however. Of course, taking photographs was, as usual in holy places, not allowed, which was indicated by little signs everywhere. I have seen other holy shrines in Iran where religious feelings were more obviously shown. Knowing about Ladurner’s article, I got a feeling that it was nothing else than fake, with the mere purpose of manipulating the German public, at least readers of DIE ZEIT. The previous months have unfortunately confirmed fears that the Middle East is on the brink of another warlike conflict.
While the breakdown of the fragile administrations in Iraq and Afghanistan is foreseeable, borderline or even failed states, the likelihood of another military conflict has consistently increased after the present US administration used an unprecedented strong, and indeed warmongering, language to warn Iran.
Posted by Muller at 19:53