Rug dealers are never scholars, and neither are collectors who, after some time, become inevitably dealers. Scholars are experts who do not need to own "collectibles" to study them. Having lived in the Middle East for a couple of years I had been infected with the carpet bug from the very beginning. Considering myself a "collector", even after some years of buying what interests me, would be an exaggeration. I have been, though, in contact with a variety of antique rug dealers over the years and have learned to be suspicious of, in particular, western self-declared pundits. What they desperately need is information regarding provenance and age. Otherwise it would be difficult to sell their inferior textiles (they keep, of course, their better pieces). Having said that, I can only thank a New York collector/dealer/expert who I have recently come across for his advice: not to buy but just enjoy and, well, study!

Of all Turkmen weavings I had always been fascinated of chuvals of the Chodor, a Turkmen tribe which had originally been living in an area in the northeastern shores of the Caspian Sea, in particular the Mangyshlak and Buzachi Peninsulas. The design was quite easy to identify, very different from other Turkmen designs, rather complex and, in a way, electrical. When living in Kuwait, they were totally missing in the supplies of local dealers. I had to wait until I had left the Middle East.

When I became more interested in a certain Chodor chuval being on offer by a dealer in Germany, I came across an article by Kurt Munkacsi, famous producer of popular “classical” music by composer Philip Glass, who is a renowned collector of Turkmen weavings. In this article which had appeared about 17 years ago, Munkacsi tries to explain provenance and, in particular, age of a great number of carefully analyzed Chodor chuvals of his collection (textural composition, autochtonous design, additions of Yomut designs) by speculating that both can be related to known historical movements of the Chodor and Yomut (originally living in the southeastern corner of the Caspian Sea) in the 18th and 19th centuries as described in Turkmen Ethnohistory by William Wood (in: Wood W, O'Bannon GW, Swinney HJ (ed) Vanishing Jewels: Central Asian Tribal Weavings, Rochester Museum & Science Center 1990). The movements were depicted in several maps indicating forceful, by Kalmuks, expulsions of the Chodor and Yomut to the Khorezm oasis south of the Aral Sea in the early 18th century (which is known for its cotton plantations and where he assumes a "Possible first Chodor interaction with the Yomut") and then further movements forced by Nadir Shah (in ca. 1740) and alliance of both tribes against the Uzbek army (a "second Chodor interaction with the Yomut") in ca. 1760. And so on. In 1873 Russians conquered Khiva (south of the Khorezm oasis and forced the Chodor to remain in this area around Porsu while the Yomut were "slaughtered and driven out of the city." 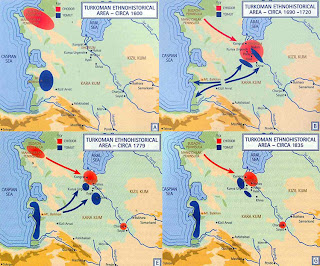 Munkacsi tries to sort out what he had found in his large collection of Chodor chuvals and describes four groups which is okay; descriptive, quite reasonable. Everything else is, of course, circular reasoning, just guessing. There is no evidence in his reasoning that known historical contacts of the Chodor and Yomut would relate to special designs and presence or absence of cotton. When he writes (in the description of plate 6, a wonderful example of great Chodor art), “A Yomut elem design and the absence of cotton in the foundation indicate this chuval was probably made after the Chodor and Yomut joined forces against the Uzbeks, and were driven from Khorezm back to Mangyshlak [i.e. after 1811]. It shows the final stage of lattice development [containing what he calls “box flowers”],” it has to be considered mere speculation. Both tribes move and, as nomads, migrate in a vast area of about 300 km times 300 km and certainly have had contacts or “interactions” for a very long time. Mangyshlak is at the crossroads of several cultures and religions, mainly Animist, Islam, and Jewish. These tribes, are not different human species. The Chodor and Yomut of the 18th, 19th centuries are not primitive “aborigines” but both pretty civilized (as their produces indicate) Turkmen, at times pastoral people living the life of nomads. 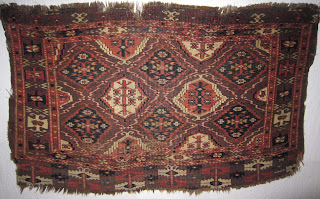 The one I was interested in belonged to Munkacsi’s group I, where the blue guls contain a vertical bar. Interestingly the piece was composed of six blue guls (considered by Munkacsi as main guls) with only one complete white and one complete red gul in the center. The “electric” lattice contains small boxes. The dealer, notorious for his bragging about provenance, historical myths and uber-precise age estimates, assigned it to the first half of the 19th century (“1800-1849”). He unexpectedly introduced Munkacsi himself informing me about a recent chat he had with him when he confirmed age. Both seem to agree that (“bold, macho”) Yomut elements in elem and vertical borders (the dealer in Germany had apparently forgotten about who used to manufacture the bags: young women), cotton (“one ply in wefts”) and small “boxes” in the lattice were sufficient for pretty accurate age estimate, according to Munkacsi’s 1835 map:

“The Aday Kazakhs drive the Chodor from Mangyshlak [to which parts of them had returned in 1811], for the last time, forcing a return to Khorezm. Fourth Chodor interaction with the Yomut.“

Mackie and Thomson had cast doubt on surviving Chodor chuvals being older than 1800. They had used color to distinguish older from newer weavings (as quoted on TurkoTek’s webpage) and describe a “proto-Chodor” (of early 19th century) as having “a very deep purple field color, the red is clear and strong tending towards orange-tan or even apricot, [and] … often have a good green or light blue-green, and a clear yellow.”

Well, someone had suggested that Munkacsi himself, who is said to own one of the largest and finest collections of Chodor textiles and who had suddenly been asked to testify our German dealer’s claim, had commissioned the latter to sell this piece. It’s speculation and I won’t be able to trace it.

Overall, antique textile collection business seems to be shady. Truth is never known (the surviving pieces are too young to do radiocarbon dating), but that fact is usually concealed, and bold but mainly irrelevant clues by self-named pundits (who are dealers, never scholars) are mainly used to justify what is “collectible” and what is not.


By the way, I have so far not figured out why certain people with their limited knowledge about culture and history of Central Asian people want to collect.

How did I come to know the above-mentioned New York collector/dealer/expert? Well, I noticed that one of the very old Chodor chuvals in Mukacsi’s paper (plate 12) of 1994 (“ca.1760”) had been published before by the former in 1988, see also here. Munkacsi doesn’t quote him, so I asked him why not. In his description he doesn’t mention a precise age estimate but describes it as belonging to “the earliest period. It has the spacious and clear drawing, wonderful color palette and very rare border patterns that should be expected from examples of great age and even though it is missing part of its length, having been rejoined, thus disfiguring the first row of major guls, its beauty and importance remain little effected.”