I know that this is going to be provocative. Comments and clarifications from people with similar experience are most welcome. 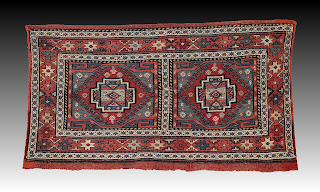 A couple of years ago, I've read about a mafrash front of the Shahsavan confederation with a somewhat different and, well, appealing design. It had apparently been offered years ago at a German auction house specializing in antique, "collectible", textiles at an estimated 7,500 Euros. I am not (or better no longer) sure, however, whether it could achieve that price or even was sold at that time. The auctioneer suggested as origin "Northwestern Persia (sic!), Azerbaidjan (a combination which immediately discredits him as expert, of course), 1st half 19th c. Size: ca. 53x95cm." And further: "Very finely woven sumakh panel in pleasant colours originating from Qeydar, a small town south of Zandjan in the Khamseh district. – Minor re-weaves in the outer border; in good condition."

There was a reference for the origin, of course: "TANAVOLI, PARVIZ, Shahsavan. Flachgewebe aus dem Iran. Herford 1985, no 87." Parviz Tanavoli is a well-reputed Iranian professor of art and design, a sculptor and painter himself, a collector of arts and an (or the) expert in Iranian flatweaves.

I was very much surprised when stumbling, only a couple of months after I had seen this particular mafrash on the internet, over a very similar piece just offered by a German dealer of antique textiles. I bought it. I erroneously assumed at that time that it might even be the back face of very same which resembled Tanavoli's no 87. Although mine had a different dimension, 83 x 48 cm squared. And, Tanavoli's, did not have a "show" back face. The other four sides were just made of kilims, which I learned later after I had been lucky to get a copy of his gorgeous book. 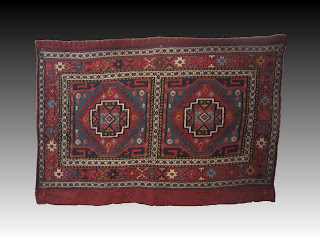 Tanavoli's book on flatweaves of the Shahsavan appeared in the same year as Siawosch Azadi's (with Peter A. Andrews) on Shahsavan mafrashs. Azadi is a collector/dealer of antique textiles located in Hamburg. He has written highly recommended standard books on Shahsavan flatweaves (1985), rugs woven in the Baluchi tradition (1986), and Turkmen weavings (1975) just mentioning a few of his works. In his book entitled "Mafrash", page 157 displays Tanavoli's no. 87 (or a very similar piece, see below; Tanavoli's is in black and white only) while on page 155, on first sight, was a mafrash displayed which resembles mine with 95% or so concordance. Overall colors, composition, colors of Medean stars (at least those of the upper and lower main border; the stars of the left and right main border differ in color) were identical. I had to scrutinize each inch to find minor differences. For instance, the colors of small hooked diamonds on blue ground in the corners of the two main medallions were just exchanged: two white and one red in Azadi's, two red and one white in my piece (there were more colors involved in mine, though). Azadi describes the origin of the front side of his mafrash on page 155: 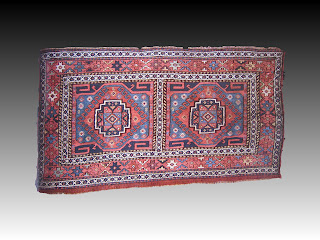 "Western Iran, mid-XIXth century. Dimensions: 95 x 53 cm (squared). The central field is devided into two rectangles with a red ground. Within this medallions of different shapes are arranged concentrically. The red hooked lozenges with truncated tips (gizil giyanakh?) dominate the composition; they contain striped rectangles. The empty spaces are filled with lozenges of various shapes and sizes, and small striped ornaments; at the same time these form components of the medallions. The main border with a red ground displays a row of stars (so-called "Med(i)ean star") alternating with twohalved counterset lozenges. The main border is flanked by two stripes with a white ground and a cranked, interrupted, interlaced vine meander (cheren), which are themselves accompanied by two gap-baja stripes."

I became concerned when the first of the above mentioned mafrashs (which actually draw my attention to the Qeydar mafrashs) was offered again at the same German auction house in last year's main Spring auction, this time at a much lower estimate. And it sold this time, for less than 2,200 Euros. The auctioneer has more information now:

"Finely woven in outstanding colours, this sumakh panel used to be the elaborate decorative face of a mafrash. The other three sides (sic! Note that mafrashs have, of course, four "other" sides) were woven in kilim technique, as shown by a comparable piece published by Tanavoli. It was made in the surroundings of Qeydar, a small town south of Zanjan in the Khamseh district. – Small restored areas along the sides, otherwise in good condition."

Azadi counted nine colors in his mafrash, which is pretty high. I found ten in mine. In the meantime, I had to conclude that Qeydar in the 19th century must have been a hub for similar looking (well, almost identical) mafrashs, since the German dealer who provided mine has sold more stuff of the kind.

To be clear at this point, I still like the pieces I've bought over the years. I rapidly noticed that age and provenance are more or less educated, or rather wild, guesses by savvy dealers (those in the West are by no means better than those in their home countries; the latter are more honest) who desperately try to hook customers and sell their, well, inferior pieces (the better ones are never for sale). The lay customer is usually told several flimsy arguments: As a rule of thumb, the more natural, of course not synthetic, colors the older the piece. No synthetic dyes would mean it must have been manufactured before synthetic dyes had been introduced. The more thoughtful and elegant the design, the older the piece.

Most of this is of course nonsense. In 1856, the first synthetic dye (fuchsin) was invented by William Perkin and quickly used in oriental weavings afterwards. At least for some time. Azadi tells us, however, that synthetic dyes only reached the Shahsavan after WWII! After Tanavoli's and Azadi's book, fakes became a serious matter of fact as John Wertime explains in his more recent excellent book on Sumak bags of Northwest Persia [sic!] and Transcaucasia of 1998.

I have not figured out yet why someone should collect these expensive pieces, but it's my strong opinion that what is collectible is just the original. Long published pieces. If later (25 years later!) very similar (almost identical) pieces emerge, there must be only one conclusion: these are reproductions. It's simple like that. First and foremost these are unique pieces. Pieces of art. There have not been manufactories for mafrashs in Qeydar or the rest of Shahsavan country in the 19th century. Qeydar was not even likely the place where Tanavoli's and Azadi's mafrashs have been woven. The Shahsavan were nomads. Their mafrashs were certainly utilitarian, other than, for instance, khorjin saddle bags or the other small beautiful weavings which might have been used as surrogate currency and exchanged for goods in the bazaar of, say, Zanjan and other towns, not really Qeydar (it was only Tanavoli who suggested the village).


And, reproductions are largely worthless, regardless how finely woven they are, how many colors were used and how nicely designed the front side is. Bad news for those who want to make a living from selling "collectibles" to their greedy but generally poorly informed clients. Dealers have to yield. But they almost never are able to present evidence, not for age and usually not for provenance. Customers have to be cautious. 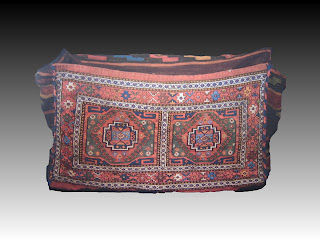 A mafrash is, of course,  a large bag. Certain dealers use to tear the bag, which is certainly difficult to store in a collection, into front, back and side panels; trying to sell them one after the other. If these bags have a cultural value, this must be considered irresponsible, almost a criminal act. If not, there is no sense in collecting them.