I have promised some time ago to describe, in separate posts, the different iwans at Esfahan’s Masjed-e Jomeh. I have discussed the southern and western iwans but political turmoil after the presidential election has largely dampened my enthusiasm of reporting on Iran’s glorious past.

What has attracted my interest on the occasion of my last visit of Esfahan were some dazzling tessellations on the Darb-i Imam (1453 CE) and on the western iwan of Esfahan’s Great Mosque (about the same time) which have caused considerable discussions in the academic world. It had even been speculated whether they represent early examples of quasi-periodicity. You may find more information on it here and here.

What is evident is that these complicated tilings frequently with five-fold ornament (decagons and pentagons) must have been composed of certain units which have been called girih tiles. They have conventional decoration ribbons with internal angles of multiples of 36°. You may find them in decorations all over the Islamic world in particular during and after the 15th century. In the finished tiling the construction lines would be erased leaving only the interlaced decoration ribbons. Thus, the underlying framework is concealed. One of the main reasons for the frequent impression of, well, dazzling. The precision which results in using these girih tiles is absolutely stunning. A nice article on the topic has recently been published by Peter R. Cromwell (Mathematical Intelligence 2009; 31:36-56). He described a somewhat larger set of what he calls Islamic prototiles, rhombus, pentagon, hexagonal barrels, octagon, bow-tie, hexagonal bobbin, and decagons.

Well, precision was not always granted. Also on the western iwan, in one spandrel, I noticed a similar tessellation as that of the nearby huge and famous decoration, which, after reconstruction, turned out to be quite different from that on the Darb-i Imam. You may reconstruct it with bobbins and bowties, and decagons bordering the spandrel. But it didn’t work out so nice. I offer here a somewhat different solution. But it is not really satisfactory anyway.

Note, that the insert below is a mirrored image of the right spandrel (not shown) which tesserae almost fit those on the left spandrel. So, the artisan knew what he did. 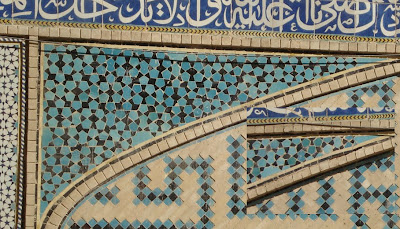 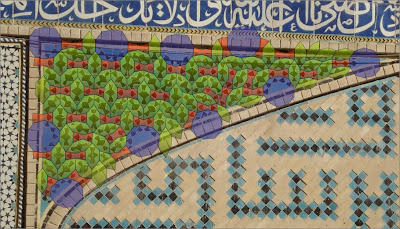 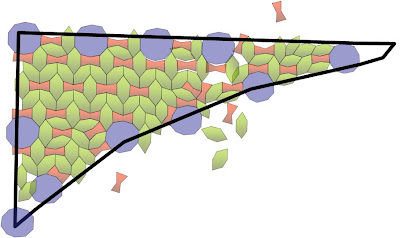 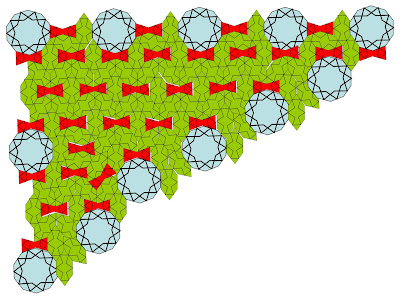