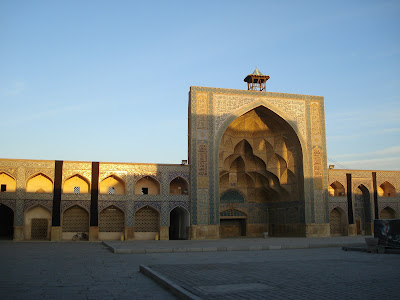 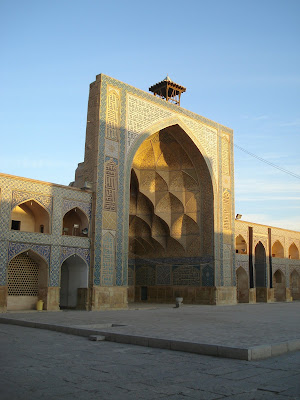 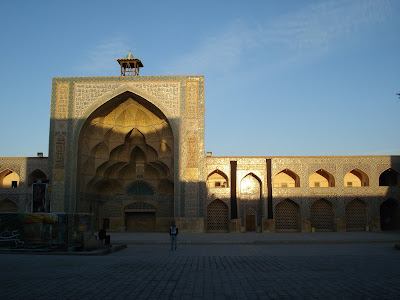 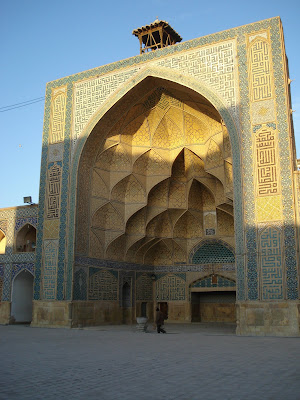 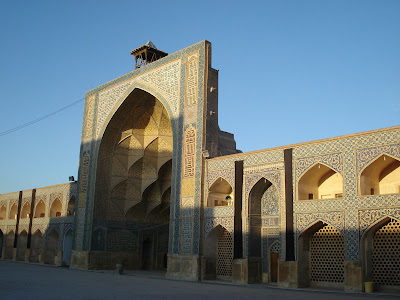 The most interesting tile decorations and muqarnas, or stalactite vaults, are found on the western iwan of Esfahan’s Great Mosque. While all iwans have been added to the Seljuq mosque after a fire pillaged by the Hashashiyyin sect in 1121 CE, their decorations are Timurid and early or even late Safavid (late 15th till early 17th century). Next to the western iwan the pretty famous Timurid gate had been moved and inserted into the façade. It contains signature and date of its creator Sayyid Mahmud-e Naqash, 1447. A similar, highly decorative floral style can be seen on the south iwan and on the Darb-e Imam, some 300 meters west to the mosque, which is dated 1453. 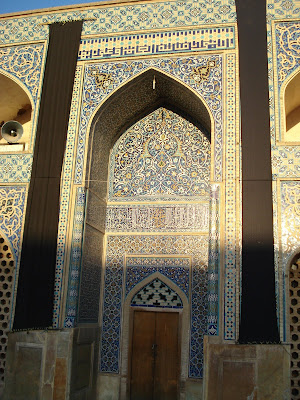 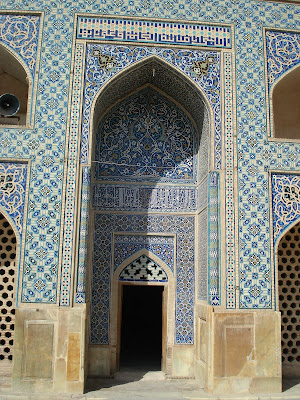 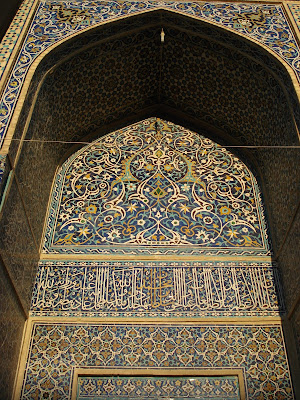 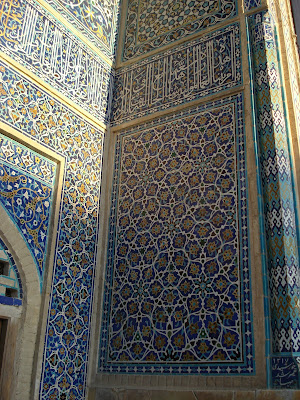 The date ۱۳۱۷ (1317) translates into 1939, by the way, when restoration had taken place. The Timurid gate near the western iwan of Masjed-e Jomeh leads to a room with a stunning dated (1310) mihrab of sultan Oljatu, the great Ilkhanid Mongolian ruler in northern Iran. The inscriptions are, according to Oleg Grabar in his book about the Great Mosque, not qur’anic, but contain traditions about mosques and about Ali. Amazing that Oljatu in fact converted to Shi’a Islam in 1310. 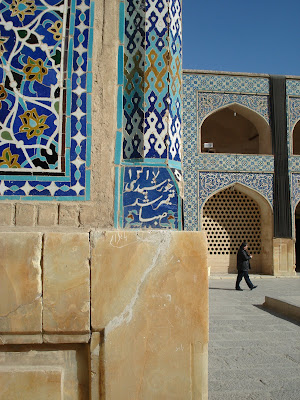 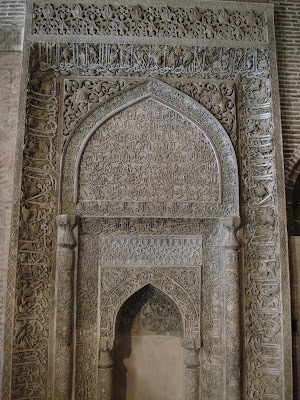 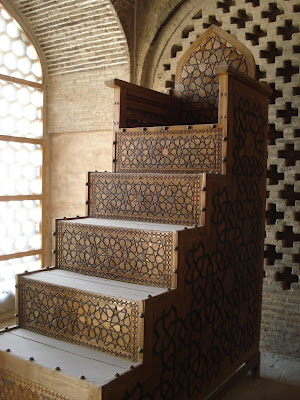 The western iwan and its counterpart to the east are called the sofe of the student (shāgird) and master (ustadh). Although both iwans were built at the same time as the south iwan (early 12th century), both of them are, “in their visible shape, late Safavid works of the seventeenth and, in case of the west one, even early eighteenth centuries”, as Grabar writes.

“[A] celebrated square panel in the western iwan [which] is one of the most commonly cited examples of complex geometric ornament using writing. It is easy to argue that here is a wonderful example of a simple design rotated 45 degrees which acquires two separate values, one as a carrier of geometric forms filled with (by the time of the panel) antiquarian writing, the other one as a violator of the sequence of both writing and architecture by forcing one into rare contortions to read the writing. And one could argue that here is precisely the use of geometry which gives it the high status so frequently heard and read about. In fact, however, the corner spaces contain the following rather undistinguished pious quatrain: ‘As the letter of our crime became entwined [i.e., grew so long], [they] took it and weighed it in the balance against action. Our sin was greater than that of anyone else, but we were forgiven out of the kindness of Ali.’ The central square is taken up by a signature of one of the most active craftsmen busy repairing the mosque in the seventeenth century. Even though formally related to the angular style of writing on the face of the iwan and in fact much more sophisticated in design, this panel is nothing more than a ‘plug’ for a local artisan.”

The exact construction of a similar “square from three squares” has been described in Abu’l Wafa’s (d. ca. 998) book “On the Geometric Constructions Necessary for the Artisan”. As Alpay Özdural describes it in his article “Mathematics and Arts: Connections between Theory and Practice in the Medieval Islamic World” (Historia Mathematica 2000; 27: 171-201), contemporary mathematicians frequently held so-called conversazione with artisans explaining them how to create new inspiring geometric decorations. 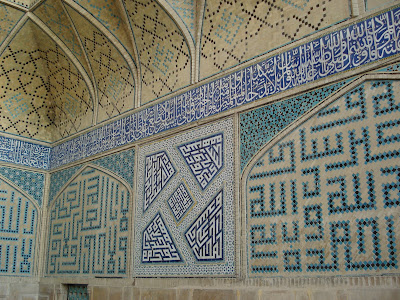 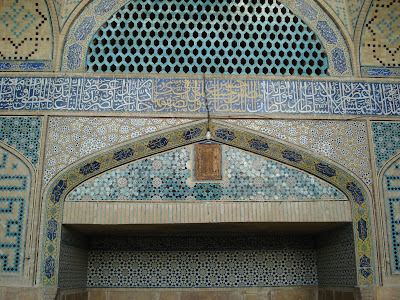 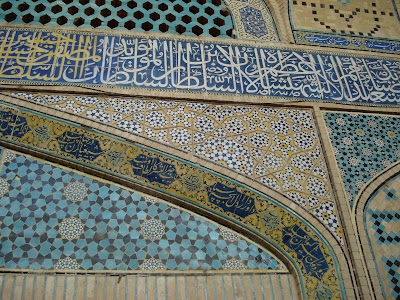 Now let’s turn to what I've called “dazzling decagonal”. I have reported on my stunning first experience with mysterious decagonal tessellations in Esfahan’s old city several times, here on this blog as well as on Freelance. There are suggestions by Peter Lu at Harvard that there had been a breakthrough in creating (almost) Penrose tiling in the 15th century, in particular on the Darb-e Imam near Esfahan’s Great Mosque. In the supplementary material of Lu and Steinhardt’s article, you may find a picture of the western iwan where the authors suggest that the tiling can be subdivided in the same way as the Darb-e Imam pattern(s). You can easily identify the pattern at the inner sides of the iwan’s portal. It is huge, about one meter wide and up to 10 meters high. At first glance the two sites seem to be an anomaly in Esfahan. Lu and Steinhardt also suggest so-called girih tiles to facilitate the incredible precision of the tiling. 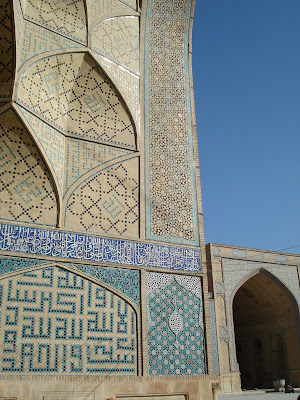 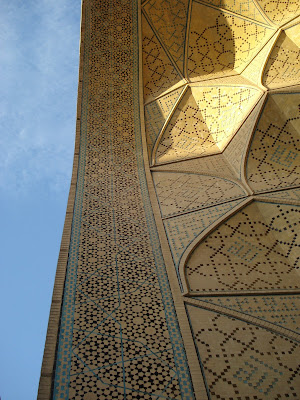 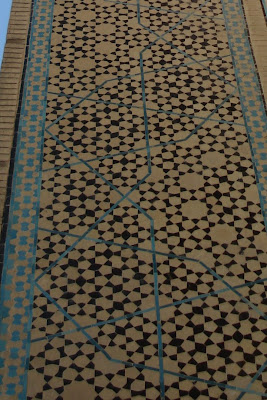 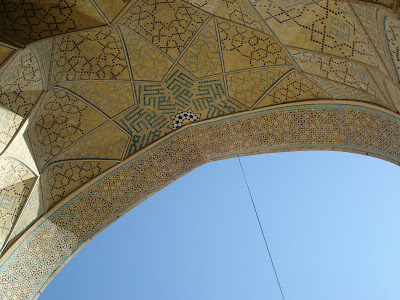 For instance, I have mirrored the right part of a picture of the arch borrowed from ArchNet (left part of the panel below) and can demonstrate (right part of the panel) that each tiny tessera on one side (as small as, say, a square centimeter) can be found in exactly the same place on the other side of the vault. 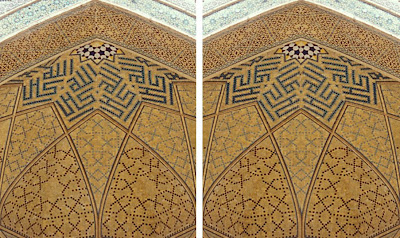 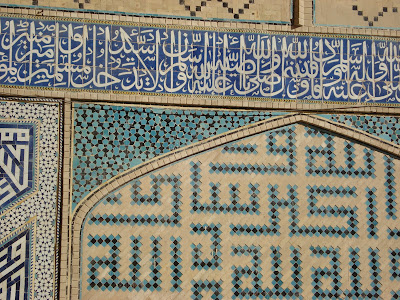 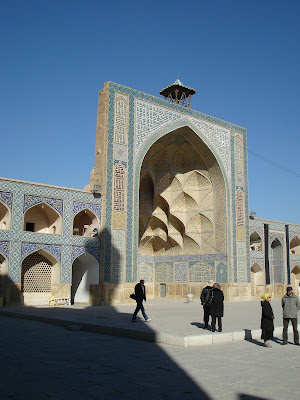