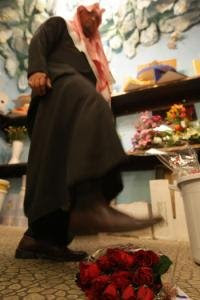 A Saudi-Arabian man was shown in the Al Watan newspaper earlier this week trampling on a bunch of roses in a flower shop, making clear that he despises Valentine's Day (February 14). Bad for him. My first thought which came to my mind was the pogroms about 70 years ago in Nazi Germany when Jewish shops were demolished ("Kristallnacht"). These fundamentalists threaten people who they urgently need for running their societies, for instance, Philippinos.

It is quite a shame that Arabs still need some extra lessions in humanity, tolerance, love and peace.

I was also wondering whether Saudi Arabian men wear winter dishdashas these days. Could it be that the picture had been taken in Kuwait? I suppose, many Philippino flower shop owners in Kuwait were scared last week as well.

Yes, sad to say, but this is mere inhumanity. I admit that I have seen a young Kuwaiti boy squeaking on the lap of Santa in the Sultan Center, and I found that inappropriate. The young father was standing along with Father Christmas and was laughing. But it makes a difference. My finding something inappropriate has to do with respect for another religion (and Santa is one of its silly aberrations). But trampling on flowers is showing contempt. And that makes it so dangerous.