From the Bazaar in Tabriz

While I do not believe certain antique rug dealers who claim time and again that there are no collectible artifacts anymore to find when in Iran, I do believe that there are many crooks underway who search for low quality textiles of the Shahsevan in the great bazaar of Tabriz only for one purpose: to cheat both their vendors and customers. I know that the economic situation for the common Iranian and, after the recent quake in August, in particular people from Tabriz has become dire after "crippling" and unilateral sanctions have been imposed by the US blackmailing also European countries. Tourists, a major source of income for so many Iranians, have abandoned the country in recent years. So, times are again good for the professional deceivers from the West (disgusting German Heinrich Jacoby style) taking advantage of either the destitution of common Iranians and the greed of "collectors" in the West.

So, let me tell a brief story which started about two years ago when becoming interested in the now gone weaving art of the Shahsevan in Northwest Iran.

Coming back to my first statement, I'd been in Tabriz, for not more than 72 hours, in 2005 when I got to know an extraordinary carpet dealer in the bazaar who had specialized in collecting and restoring very special rugs which he smuggled from nearby Armenia. Pictorial designs, not at all "oriental". I have to admit that none of these rugs was appealing to me, but he talked about a big market in particular in the United States where he sooner or later would be able to emigrate.

I had been introduced to him by one of his young colleagues, with whom I every now and then exchanged emails. So, as regards the question, 'Are there any Shahsevan artifacts from the 19th century still available in Tabriz', he immediately came up with pictures of a very special rug. 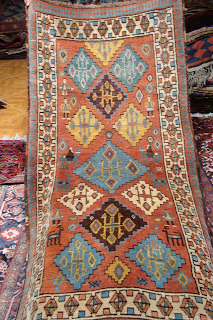 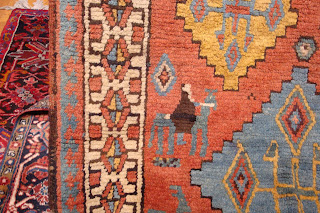 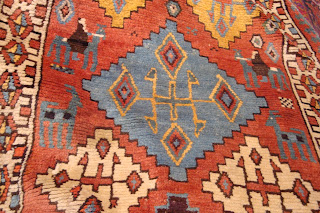 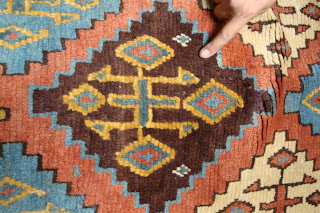 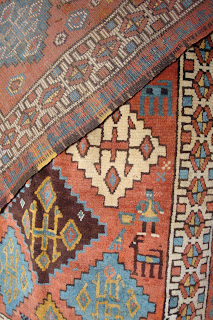 One has to know that the Shahsevan were famous for their exquisite flatweaves, khorjins and mafrashs. The best pieces (small bags, khorjins and chantehs) which have yielded very high prices in the West, in particular after publications by Parviz Tanavoli, Siawosch Azadi in the 1980s and, more recently John Werteim (1998), have not been in use but have been manufactured for barter. It was questioned whether the Shahsevan had even been weaving pile rugs but had rather bought them in the bazaar.
So, now we can see a sample which is special in several aspects. The composition of the rug (226 cm x 106 cm) is balanced with its colorful stepped lozenges. How animals and human beings (men, veiled women on horses, goats) in the border of the main field are naively depicted is quite amusing. It might in fact be a wedding rug, produced by the bride or mother of the bride. The almost interlacing, "kufic", design in the sides of the main border is also interesting.
Now, what makes this Shahsevan? My friend mentions the dresses of the gentlemen. They were probably khans, or leaders of the group, he assumes. No credits. 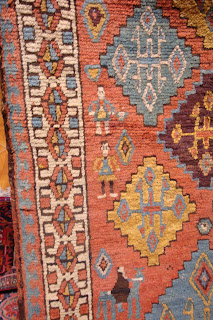 He was very much convinced that it was made by the Shahsevan. He mentioned that unfortunately more than one third of the rug (about 35%) was repaired, at least by an expert. So what is it worth? We can get it for $3500 or $3800, he promised, although the owner had asked for considerable more money. Well, I had to admit that this turned me down. The age of this piece might be not older than mid or late 20th century. Is it collectible? No, not if it is contemporary. Then the Shahsevan were history and the recent weavings by people claiming descent from the Shahsevan were for commercial purpose. And no! It is not original, 35% repair is not a trifle. If someone needs proof that the Shahsevan also wove pile rugs and that these were not so appealing as their more spectacular sumakhs, this is not sufficient. (I have to admit, though, that the longer I look at the pictures the more I get a clue about its character.)

I remembered that once this very young friend of mine gave me some advice when bargaining with Iranians. Just bid half of the amount and then see what he does, he suggested. Anyway, I did not express any interest.

What a surprise when I saw the piece offered by an Iranian on a commerical website the other day. I contacted him and he told me that he had been in Tabriz recently (and had apparently brought what he had found in the bazaar). On request, he wanted to have $2500, a gorgeous price he claimed. But is it reasonable? "There are some small repairs here and there." That's what this dealer tells.