Patterns of Evolution in Tribal Textiles And the Confusion About Provenance

I had recently made efforts to draw the attention of several collectors/dealers of Iranian/Central Asian tribal textiles to the recent work of anthropologists and archaeologists who have employed contemporary methods of phylogenetic analysis of evolutionary patterns, something which I have been familiar with for some time. Unfortunately, respective efforts were, by and large, unavailing and at least to me revealed an overall amateurish approach of assessing age and provenance of newly emerging or already published "antique" pieces by self-promoted experts/dealers within a by and large shady business whose main effort is to hook future "collectors". There seems also to be, well, if not an intellectual gap between scientists and those who, at an early stage of their career, had changed areas of interest from research to commerce, clearly lack of knowledge about scientific method in the latter group. I do not directly claim that they are just conscious posers or impostors, but easily identifiable as such anyway.

I had first encountered Jamshid Tehrani's work in more detail, which he had done with colleague anthropologists at Durham University, when recently arguing with an American rug dealer who is now located in Germany (a self-proclaimed "expert" in Baluch weavings). I had inquired of a "Baluch" rug which he assigned to the "Hazara" of the Badghis province in Northern Afghanistan, and more precisely those living in Qala-i Naw. And further, he mentions "early" meaning very old (18th century) in antique rug dealers' jargon ("earlier" samples have not survived, I suppose, simply due to a general utilitarian manufacturing, not commerce). Since this particular dealer had found in the kilim part of the rug an Afshar design pattern, he was quick to suggest intermarriage between Hazara and Afshar (both Shi'ites) in the Kabul area. 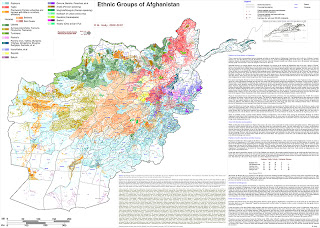 
Well, the Hazara in the Badghis province are Sunnis, in contrast to those of the Hazarajat in Central Afghanistan. In his standard book on Afghan carpets, R. D. Parsons writes (p. 152),

"The fourth member of the Chahar Aimaq tribes is the Qala-i-Nau Hazara, who live in and around the small town of Qala-i-Nau, the capital of Badghis Province. This tribe of Hazara are Sunni Muslims referred to as Sunni Hazaras, quite different from the Hazara native to the Hazarajat region of central Afghanistan who are Shi'a Muslims. As with the Hazara of the Hazarajat they are said to be descendants of the hordes who accompanied Genghis Khan. However, another theory claims they only settled here in the middle of the eighteenth century when they were forcibly displaced from the Hazarajat by King Nadir Shah."

So, Hazara living in Qala-i Naw which is close to the Iranian border and certainly part of greater Khorasan might have forcibly been displaced from the Hazarajat in the mid-18th century by Nadir Shah, a Sunni. In a tribal society, intermarriage between different tribes is highly unlikely, in particular when members belong to different faiths and this was confirmed immediately.


Knowing of Tehrani's work on population co-phylogeny by reconstructing the evolution of Iranian tribal craft traditions, I contacted him and here is his response.

"I am afraid I have not carried out any analyses of Hazara or Afshar traditions, so would not be able to tell you about their phylogenetic relationships. In the absence of such knowledge it is hard to tell whether the kilim pattern you mention represents evidence of blending between their traditions (via intermarriage or some other process, such as contact, trade, etc.), or  alternatively, a "missing link" that would indicate descent from a common ancestor. Having said that, my ethnographic studies of Iranian tribes suggest that intermarriage is a fairly unlikely explanation, since it only occurs under very restricted conditions, namely, when members of different tribes settle in large towns and cities and basically abandon their previous way of life (including weaving), or when their populations dwindle to the point that their survival as independent endogamous entities becomes unsustainable. If you think these conditions might be met in this case then intermarriage might explain the presence of the Afshar kilim pattern on a Hazara rug. Otherwise I would suggest that other explanations - either descent, or borrowing (perhaps via participation in commercial production?) - are more plausible. Sorry not to be of more help, and I wish you luck in your efforts to solve this mystery!" (Emphasis added.)

The question here is whether traditions, for instance weaving techniques and special designs, which are characteristic for certain tribes which are known to evolve mainly "vertically" (from generation to generation, that is, from mother to daughter) or whether there is any likelihood that they can also be transmitted "horizontally" among peers. Tehrani had conducted a field study in the early 2000s when living among different tribes in Iran (Yomut, Shahsevan, Qashgai, Boyer Ahmad, Bakhtiari, Papi) and had interviewed over 60 weavers (all women) about how they learned to weave. In a summary of some of his group's recent articles he writes,

"The interviews revealed important differences in the ways that techniques and designs are transmitted. Techniques are almost always passed on from mother to daughter, usually at a young age (between 9 and 14 years old), over a period of several years. During their apprenticeship, young weavers also build up a repertoire of designs by collaborating with and imitating their mothers. However, whereas adult weavers rarely acquire new techniques once they begin to work independently, they frequently copy designs from their peers. We can therefore hypothesize that while the transmission of weaving techniques follow similar pathways to the transmission of genes (i.e. they are transmitted "vertically" between generations), the transmission of designs is likely to be much more complicated (since they can be transmitted "vertically" between generations and "horizontally" within generations)." 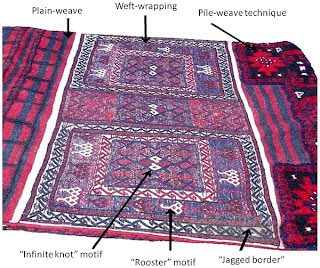 
Tehrani and his colleagues tested this hypothesis by using a phylogenetic technique known as cladistic analysis which focuses on variation of "characters" (for instance gene sequences or morphological traits in biology), in the case of material culture stylistic and/or technological elements of assemblages such as (in our example) variations in textile ornaments (for instance, as shown in a recent publication of the group, the "infinitive knot" motif, the "rooster" motif, a "jagged border"), as well as knotting or weaving techniques (plain weave, weft wrapping and pile knotting, all found in the same bag from the Bakhtiari tribe).

"Cladistic analysis reconstructs relationships among taxa or classes by distinguishing characters that are evolutionary novel (also termed apomorphic or derived), from those that were present in the last common ancestor of all the taxa under study, which are labelled ancestral or plesiomorphic. The presence of a derived trait in two or more taxa provides evidence that they are descended from a common ancestor of more recent origin than the ancestors they share with the other taxa under analysis." 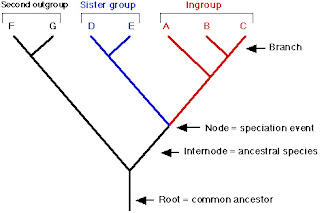 Cladogram. A popular method to identify which traits are derived and which are ancestral is outgroup analysis. An outgroup is defined as a taxon that shares a common ancestor with the taxa under analysis (the ingroup), but is of more distant origin than the ancestor the analyzed taxa share with each other.


Once the direction of change could be established for a character, a branching diagram that connects taxa according to their relative derived status can be constructed, a so-called cladogram. The classic model for evolution of species is the Darwinian model of descent with modification.

"If cultural histories would follow this concept, and descent with modification were the only cause or source of similarities among taxa, all the character cladograms would be compatible with one another. Normally, however, a number of the character cladograms will suggest relationships that are incompatible because [...] common descent is not the only source of similarity among taxa. How can we sort true family resemblances (known in phylogenetic terms as homologies) from similarities resulting from other processes such as independent evolution and borrowings (homoplasies)?"

Well, one has to find a consensus cladogram that is consistent with the largest number of characteristics and therefore requires the smallest number of evolutionary changes to account for the distribution of character states among the taxa, an approach based on the principle of parsimony (explanations should never be made more complicated than necessary). Characters consistent with the consensus cladogram are then considered homologous (common descent), those which are inconsistent homoplastic (similarities due to other processes such as borrowing and blending among lineages).


Tehrani's hypothesis that similarities among the designs used by Iranian tribes (transmitted both vertically across generations and horizontally within) would be much more homoplastic than similarities among their techniques could be rejected after cladistic analysis of 122 decorative and technical characters from the six tribal groups mentioned before, the Yomut, Shahsevan, Qashgai, Boyer Ahmad, Papi and Bakhtiari. In fact, similarities and differences among the assemblages can be largely explained in terms of descent with modification (the classic Darwinian evolutionary model) from ancestral assemblages. Most interestingly, the phylogenetic signal in design characters is as strong as ("if not stronger than") the signal in technical characters. Thus, transmission of designs between weavers occurs mainly within, rather between groups.


This is not very much surprising in particular when considering the life (settled or still semi-nomadic), even in the recent past, in tribal areas in Iran, as has been described, for instance, by Erika Friedl in her classic books on Women of Deh Koh  and  Children of Deh Koh (of the Boyer-Ahmadi, living in the southern Zagros mountains). They have shown that girls are married off, often at young age, mainly within small villages. Intermarriage between tribes, which would expose the bride to different weaving traditions in the new family, would be extremely extraordinary, it can even be ruled out.


Coming back to the confusion among dealers about age and provenance. I would agree that lifelong dealing with textiles may put some of them in a position to make claims which might lend them authority. What is missing is certainly any evidence. As long as the origin and history of certain pieces is kept in an obscure state, any claims should be met with basic skepticism. As an example, the bag face below had been described (even published in 2000) as 19th century Shahsevan sumakh with extra weft of the Khamseh region. It was later offered to collectors as "one of the oldest" Luri bag faces the dealers knows of and, finally, displayed even "possible Kurdish influence". 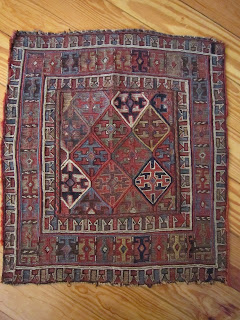 A sumakh bag face showing a Bakhtiari design pattern in the main field.


Respective ethnicities are quite different, separated by huge distances, language barriers and high mountain ranges. The Shahsevan claim descent from Oghuz Turks which had invaded Iran in the 10th and 12th centuries. They speak Azeri, a Turkic language. Among Luri (an Iranian language) speaking tribes of the Zagros mountains in Southern Iran are the Boyer Ahmadi and Bakhtiari tribes. Kurds are an Iranian people  speaking the Kurdish language. Any intermarriage between these ethnicities is highly unlikely. The bag face in question has a main field most characteristic for Bakhtiari weavings. Two outer borders with its animal or bird heads facing each other (separated by a border displaying stylized rams or blossoms) are on the other hand quite special. The weaving is rather loose, in contrast to common Bakhtiari weavings which, in their bags, usually have more durable pile knotting at the bottom. The patina of the bag may in fact point to old age. How old remains a matter of guessing.
Posted by Muller at 18:30